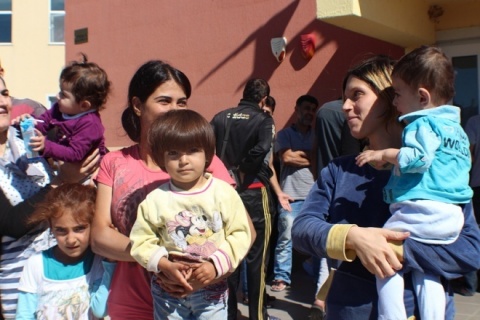 All refugee women and children in shelters in the Bulgarian capital are reported to be in distress. Photo BGNES

Bulgarian doctors have alerted about the threat of epidemics in Sofia districts where refugees are sheltered.

The biggest threat is posed by the shelter in the Sofia district of Vrazhdebna, where representatives of the Bulgarian Helsinki Committee found stark violations of hygiene rules and deplorable conditions. The shelter is already infected with fleas, lice and worms, reported bTV.

All women and children are reported to be in distress. They are starving, cannot bathe, have no sanitation and hygiene consumables.

"If the bathrooms in Vrazhdebna don't get disinfected, there is a real health risk of hepatitis and dysentery," warned pediatrician Dr. Lyudmila Bazhdarova.

The State gives refugees BGN 65 a month each in spending money, but, according to the bTV report, they use it to buy medications for their children.

The country has asked for EU aid in order to deal with the ongoing refugee influx caused by the Syrian conflict.