Bulgarian Homosexuals Have to Keep Quiet 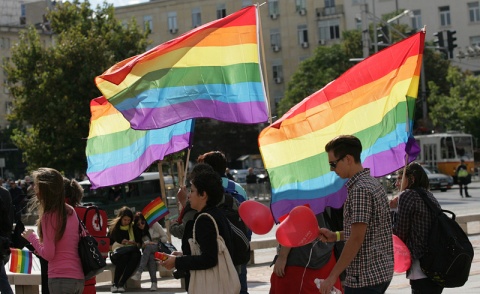 Homosexuals in Bulgarian mostly have to live their lives in the shadows. Those who come out risk losing their friends and their jobs. The only freedoms are in the shadows.

"Those two women over there," says Georgi Ivanov in a loud stage whisper as he leans across the table - "they're lesbians." He grins. Then he leans forward again: they've got a daughter, he says. And (pointing to two men in another corner of the beer garden in a shaded back yard) those two men over there - they're also a couple.

How does he know that? "Oh, everybody knows such things inside the community."

The "community" is the group of homosexuals and transsexuals in his home town of Plovdiv in Bulgaria who have a strong network among themselves, but who have to keep their sexual orientation secret towards the outside world.

"Only my best friends know that I'm gay," says Ivanov, who's 21. That's not his real name - it took him quite some time to decide on it: "It's a typical Bulgarian common-or-garden sort of name." He wouldn't like to see his real name in the media - he wouldn't like his family to know that he has a boyfriend with whom he shares a room in a student hostel at the Faculty of Medicine. He'd quite like to marry him later - "I mean, if we stay together that long." But his family shouldn't know anything about it: "They think homosexuality is a sin."

Ivanov plays with his green rubber wrist-band. "Different, but all equal" is the slogan printed on it - which is not altogether true in Bulgaria, at least, among large parts of the population.

"There's a mantra in Bulgaria," says 26-year-old Radoslav Stoyanov who works for the Bulgarian human rights organization Helsinki Committee: "I've got nothing against homosexuals, so long as they remain invisible." That's how many Bulgarians think. "And most homosexuals accept that condition and try to remain as discreet as possible.

But it's hard to change Bulgarian society's conservative attitudes if there's no open debate: "How can you fight against silence?" asks Stoyanov, somewhat at a loss. But he knows the high price one pays if, like him, one admits publicly to one's homosexuality. He came out a couple of years ago, at a time when there was a debate in Bulgaria over the introduction of registered partnerships for same-sex couples. He took part in radio programs and was interviewed on television.

"I lost many friends," he remembers. And he remains single: "No-one wants to be with an activist who has come out in public."

When he's finding it tough to keep going, says Stoyanov quietly, he gets his motivation from the thought that it's much better in other countries, like Germany or Britain. And he's sure that the situation will change sometime, if not as the result of a change from within society, then as a result of pressure from outside, from the European Union.

It's not as bad as in Russia, where "homosexual propaganda" has just been made an offense - to the outrage of activists and the indignation of the EU. All the same, he wouldn't advise any same-sex couple "even if they were foreigners" to walk through Sofia hand in hand. "The city park is particularly dangerous, since there are many far-right groups there."

Hunting down homosexuals? The unofficial spokesperson of one of the two Sofia football fan-clubs shakes his head: "We've got nothing against such people, so long as they don't make it public," he says, carefully avoiding the use of the word "homosexual." The fan-club invites journalists for interviews in an almost empty flat in the center of town. The spokesman apologizes: they've only just started using it, but their club house gives the wrong impression of the club "with its deathheads and banners and so on."

The spokesman wants to be sure one doesn't get the wrong impression that Bulgarian hooligan fans, who have a reputation for violence, are also homophobic. Of course, individual hooligans might go over the top towards "such, er, people," but "they are individuals and we're not responsible for them." He'd rather talk about something else.

Hooligans? Ivanov shrugs: that's not such a problem in Plovdiv - it's a university town, and fairly liberal and open-minded. "Of course, it's different in the villages; there, it can be dangerous to be gay." But in Plovdiv, which has applied to be a EU capital of culture, it's not so bad: "I feel OK in Bulgaria. I can do what I want."

Eventually, he would like to have children, "perhaps three, perhaps more." Ivanov smiles: perhaps in a few years, Bulgarian society will have come so far that he'll be able to adopt children together with his partner, or could actually have children with the help of a surrogate mother.

And if not? "Then we'll go for a double marriage of convenience with a lesbian couple." He grins again. A woman friend of his wants to have a sex change. That's not allowed under Bulgarian law, "but I'm sure she'll find some medical students who'll give her some hormones." He shrugs: "As I say: anything is possible in Bulgaria, so long as you don't speak about it."

Views on BG » Be a reporter: Write and send your article
Tags: homosexuals, Bulgaria
Advertisement
Advertisement
Expats.bg All Are Welcome! Join Now!
Related Articles:
More from Views on BG