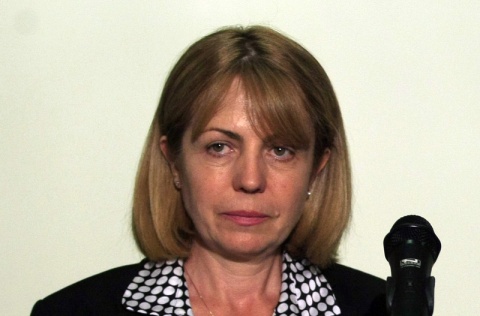 Fandakova expressed hopes that Sofia would be awarded sufficient EU funding under the Growth Regions operational program in the 2014-2020 next programming period. Photo by BGNES

The Sofia Municipality and the European Investment Bank (EIB) have signed a contract for a loan of EUR 50M for the rehabilitation of the city's road network.

The news about the loan was announced EIB Vice-President Mihai Tanasesku at a press conference in Sofia, according to reports of investor.bg.

Tanasesku and Sofia Mayor Yordanka Fandakova inspected the ongoing construction of the subway section to the Mladost 4 district.

The loan from the EIB will be used to build, expand and repair 22 small road networks in Sofia with a total length of over 56 km. Apart from that, over 8km of tram sections, which are part of these networks, will be upgraded.

He told journalists that he had discussed a number of new projects with Fandakova, including schemes aimed at increasing the energy efficiency of buildings.

"I believe that this is an important project for Sofia and I hope we will be able to implement it successfully. Work on the waste management project continues," he added.

Fandakova expressed hopes that Sofia would "be given a special place" in the Growth Regions operational program in the 2014-2020 next programming period.

She explained that she had discussed with the EIB Vice-President a project for building an installation for utilizing refuse-derived fuel (RDF) at heating utility Toplofikatsia Sofia, thereby reducing its natural gas consumption by 10%.