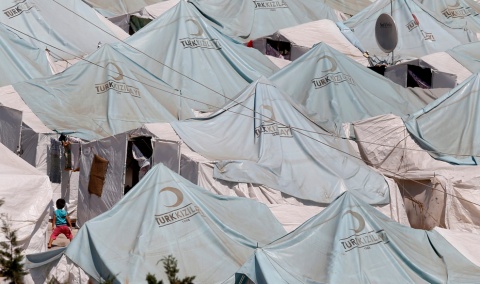 A Syrian boy plays at a Syria refugee camp in Yayladagi district, in Hatay Turkey, on September 11. Photo by EPA

The United Nations expects another two million Syrians to become refugees in 2014.

A further 2.25 million people are expected to be displaced within the country, according to a document obtained by Reuters on Monday.

Officials from 10 UN agencies as well as the International Organization for Migration and 18 other aid groups met in Amman, Jordan on September 26 to plan their response to the crisis for 2014.

"The most likely scenario was perceived to be continuation and escalation of the conflict with increased fragmentation, disruption of essential services and further erosion of coping mechanisms," an official from the UN Office for the Coordination of Humanitarian Affairs told the meeting, according to Al Jazeera.

OCHA forecast that up to 8.3 million people - or more than a third of Syria's pre-war population of 23 million - would be in need by the end of 2014, a 37 percent increase over 2013, including 6.5 million internally displaced people, a 54 percent increase.

The number of refugees was expected to hit 3.2 million by December 2013, 1 million more than now, and rise by an additional 2 million in 2014.

The UN refugee agency UNHCR says 17 countries, including 12 European ones, are involved in a programme to resettle Syrian refugees.

Many who have reached Europe so far are women and children who have crossed from Turkey into Bulgaria, where UNHCR has said the available accommodation is overcrowded, unsafe and "dire".