Sofia to Rally in Support of Russia-Jailed Greenpeace Activists 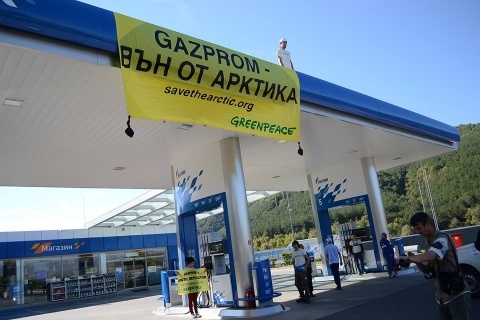 On September 26, a group of Greenpeace activists occupied a gas station near Bulgaria's southwestern town of Blagoevgrad to protest against Gazprom's Arctic drilling. Photo BGNES

Citizens in the Bulgaria's capital Sofia are joining Saturday the so-called "30 for Arctic" protest rally in support of detained last month in Russia activists of the international organization "Greenpeace."

The rallies will be held on the World Day of Solidarity with "30 for Arctic" in over 100 cities around the world.

"To protect the Arctic is not a crime," "Greenpeace" say.

"Greenpeace Bulgaria" is inviting local residents to express their solidarity with environmentalists at the Monument of the Soviet Army at 4:00 pm this Saturday.

Activists from Brazil, Britain, Finland and Sweden, and a British videographer were charged, the group says.

The activists were detained aboard a Greenpeace icebreaker during a protest at an offshore oil rig in the Arctic last month.

Most of the 30 people from 18 countries detained from the Arctic Sunrise ship were remanded for two months last week after investigators opened a criminal case on piracy charges related to the incident, in which some of the activists tried to scale the oil rig in international waters in the Pechora Sea on September 18.

A British freelance videographer and a Brazilian activist are among the five charged with piracy, Greenpeace said in a statement last Wednesday. The group's lawyers said they are planning to appeal.

The piracy charges citied in the original case carry a maximum punishment of up to 15 years in prison, RIA Novosti informs.

Only the day ago, the Netherlands announced that it was initiating legal action against Russia to release the activists accused of piracy.