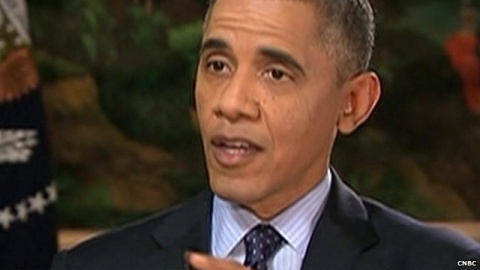 Obama: "Absolutely, I am exasperated because this is entirely unnecessary". Photo grab by CNBC

US President Barack Obama has warned that Wall Street should be concerned that a conservative faction of Republicans is willing to allow the country to default on its debt.

The US government has partially closed after Congress failed to agree a budget and will run out of cash on 17 October unless its debt ceiling is raised.

Obama held on Wednesday talks with Congressional leaders that ended without agreement.

In an interview with CNBC prior to the meeting, Obama said he was "prepared to negotiate on anything" regarding the federal budget -- but only after Congress passes "a clean piece of legislation that reopens the government" and allows the U.S. "Treasury to pay for things that Congress itself already authorized."

Obama said he was "exasperated".

"I am exasperated because this is entirely unnecessary"

"If we get in the habit where a few folks, an extremist wing of one party ... are allowed to extort concessions based on a threat of undermining the full faith and credit of the United States, then any president that comes after me ... will find themselves unable to govern effectively," Obama said. "And that is not something that I'm going to allow to happen."

The US government closed non-essential operations on Tuesday after Congress failed to strike a deal on a new budget.

Republicans and Democrats are blaming each other for the impasse.

However, as one budget crisis raged in Washington DC, another one - potentially more dangerous - loomed in the coming weeks.