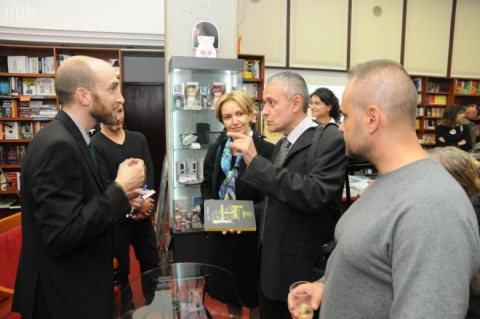 Greenberg is in Bulgaria to promote the Bulgarian edition of his book on WikiLeaks, "This Machine Kills Secrets."

The premiere was held Tuesday evening in the capital Sofia.

The book traces the history of cryptography and anonymity. It tells about the new age of strong anonymity that integrates cryptographic ideas enabling whistleblowers and leakers on a scale that no one had ever seen before, and looks into how those tools will also enable the next WikiLeaks.

Greenberg's interest was sparked by outrage after seeing a video, released by WikiLeaks, showing American soldiers killing from a helicopter civilians and journalists in Iraq.

The author has met WikiLeaks founder Julian Assange just weeks before the whistle-blowing site sent shockwaves across the world by making public 250 000 US diplomatic cables.

This prompted the journalist to seek the roots of technologies that allow such huge leaks and disclosure of top classified documents, which could be seen by millions of people.

Three years after the meeting with Assange, the book was released on the Bulgarian market by Millenium publishing house.

According to the journalist, the top conclusion from his extensive work, for which he traveled to a number of locations such as Germany, Sweden and Bulgaria, among others, is that internet technologies, particularly TOR, have made leaks of large volumes of secret documents easy and free of charge.

"We live in times when anyone, in a matter of seconds, could inflict serious damage on the company where they work. This threatens institutional security, but the privacy of thousands of spied on people is threatened as well," the author said in Sofia.

He strongly advised everyone to use encryption to protect themselves from unwanted online surveillance.

Greenberg added the latest whistle-blowing case – Edward Snowden – which happened after the book was published, clearly demonstrated that everything people do online, particularly in the US, can be monitored, because of the almighty National Security Agency, NSA.

The journalist has also written an afterword on Snowden for the paperback release of his book.

He further recommended applications such as Silent Circle to protect one's smartphone, but stressed the latter are a much easier target for surveillance.

"The most interesting thing I learned from WikiLeaks is that journalists now can use certain programs to protect their sources. This is what WikiLeaks achieved historically and unprecedentedly. Journalists need tools and methods to do their jobs, to protect democracy. We are now witnessing a paradox – mega leaks of secret information on one hand and on the other, such large-scale unauthorized surveillance that it threatens the connection between a journalist and his sources," said Greenberg.

The author believes that media still don't fully realize the importance of Assange's work as a symbol of the future of technologies.

His book also has its very own "Bulgarian trail." Part of the narrative is dedicated to Bulgarian investigative journalists Atanas Tchobanov and Assen Yordanov, and their sites Bivol and BalkanLeaks, which Greenberg calls "WikiLeaks' Most Successful Copycat Site."

During the premiere, the author credited the two Bulgarian journalists for showing to others how the WikiLeaks model can be successfully replicated.

He praised Tchobanov and Yordanov for being the "real heroes" in exposing the truth, particularly the alleged criminal past of former Prime Minister, Boyko Borisov, despite threats and defamation.

Greenberg noted that he still does worry about their safety, as Assen Yordanov, in particular, has already experienced an attempted assassination, which is detailed in the book.

The journalist says whistleblowers have always been attacked by those in power and by corporations.

He explained Snowden is just one of the eight whistleblowers to be prosecuted and convicted during the term of US President Barack Obama despite his election promises, when he called such acts "acts of courage and patriotism."

The discussion was hosted by Grisha Atanassov, translator of the book in Bulgarian and lecturer at the Journalism and Mass Communications Department of the University of Sofia.

The guests at the premiere included readers, journalists, bloggers, writer Rumen Leonidov, and political scientist Evgeniy Daynov, among others.

Dr. Solomon Passy, founder and President of the Atlantic Club of Bulgaria and former Foreign Minister, and his wife, Gergana Grancharova, former EU Affairs Minister, also waited in line to get Greenberg's autograph.

Investigative journalists from Bivol, Tchobanov and Yordanov, attended the event as well.

From Sofia, Greenberg will travel to the Black Sea city of Burgas, where he will promote his book Thursday evening.

In a November, 2012 Novinite.com (Sofia News Agency) exclusive interview Andy Greenberg discussed his book, which at that time was not yet available in Bulgaria, even in English.