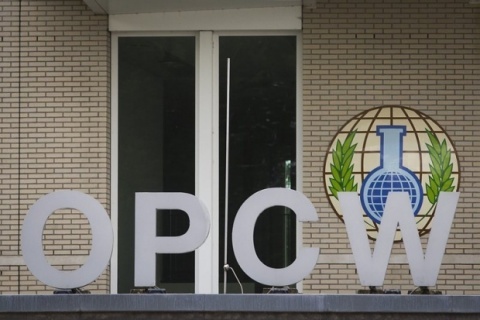 A team of international disarmament experts is due to arrive in Damascus to begin work on dismantling Syria's chemical weapons arsenal.

The inspectors from the Organisation for the Prohibition of Chemical Weapons (OPCW) stayed overnight in Beirut, Lebanon, before crossing into Syria on Tuesday.

They will first discuss operation logistics at the Foreign Ministry in Damascus before verifying the sites and making assessments, the BBC infforms.

The arms monitors are then expected to destroy the equipment used for mixing and preparing chemical weapons, as well as the munitions used to deliver them.

Inspectors will seek to destroy the mixing and filling apparatus by November 1 by removing parts, pouring concrete into machines, running engines without motor oil until they seize up, and other mostly low-tech methods.

The OPCW experts filed an interim report last month confirming that the nerve agent sarin had been used in attacks on August 21 near Damascus.

Last month, Syria handed the OPCW a full account of its arsenal, as part of the US-Russian plan.