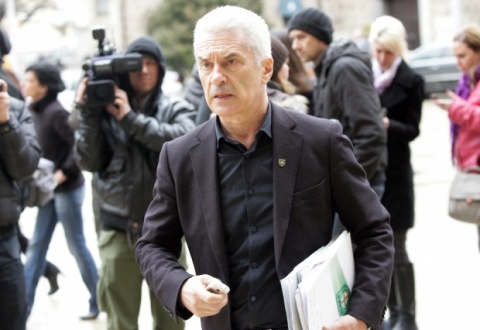 Over 20 Ataka lawmakers behaved disorderly at the Belgian capital’s La Maison du Cygne (The House of the Swan) restaurant, disturbing other guests and attempting to flee the place without paying their bill, bTV informs.

“When they arrived, they started ordering considerable amounts of champagne and grappa. They had too much alcohol at one point,” the restaurant’s manager has told bTV.
The manager said the Bulgarian MPs threw champagne corks at restaurant employees and destroyed food that was prepared for other customers.

The lawmakers refused to pay a EUR 1530 bill, forcing employees to block them inside the restaurant until the bill was eventually paid.

Last week, Ataka’s lawmakers embarked on a series of antics at the European Parliament in Brussels, instead of participating in a no-confidence vote against cabinet at home. The official reason for the Brussels visit was to demand an excuse from German EPP MEP Doris Pack, who called Ataka xenophobic and anti-European.

The MPs were unable to enter the European Parliament as no MEP would agree to meet with them.

Ataka’s controversial leader Volen Siderov, an author of two anti-Semitic books, has stirred a number of scandals over the last few years. In 2010, he was detained in Germany after he hurled racist insults at the attendants of a Lufthansa flight.

He was recently spotted carrying a gun to the Bulgarian Parliament.

Even though it is not officially in power, Siderov’s extremist party is a key ally of the country’s fragile Socialist-led coalition government.