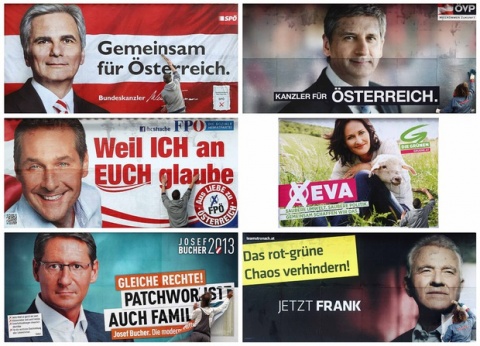 More than six million Austrians are voting in a general election Sunday to choose 183 deputies to the lower house of parliament.

Cuрrent Chancellor Werner Faymann's Social Democrats (SPOe – with 27%) and the conservative People's Party (OeVP – with 22%) are likely to retain majority in parliament.

However, a lower than predicted result may force these pro-Europe parties to seek a third partner as several Eurosceptic formations - including the far-right, anti-immigrant Freedom Party (FPOe – third in exit polls with 21%) - are also running in the elections.

A party must cross a 4% threshold to win seats in the chamber.

The BBC reminds that SPOe and OeVP have dominated Austrian politics since World War II, and may well continue to govern until at least 2018.

The Greens are also expected to do well.

Polls opened at 05:00 GMT and will close at 15:00 GMT, with the first results expected within hours.

However, if the result is close, the outcome may not be clear until Monday, when absentee ballots will be counted.