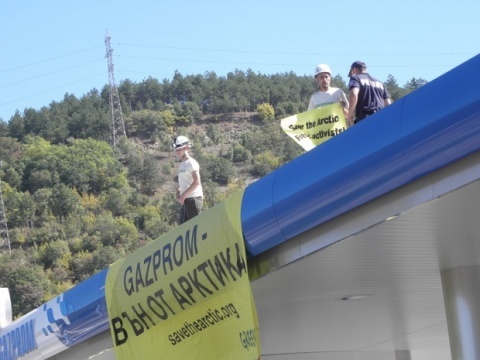 On Thursday, a group of Greenpeace activists occupied a gas station near Bulgaria's southwestern town of Blagoevgrad to protest against Gazprom's Arctic drilling. Photo BGNES

The Greenpeace activists arrested Thursday by Bulgarian police for occupying a Gazprom gas station near the Bulgaria’s southwestern city of Blagoevgrad, were released on Friday, being declared not guilty in minor hooliganism.

The six activists have not damaged the gas station property and the Blagoevgrad Regional court ruled on a BGN 100-fine for each of the detainees, the local judge explained.

The activists claimed that the gadgets they used to climb over the station belonged to the premise and were not additionally brought.

The gas station losses amounted to BGN 1000 – BGN 2000, assessed the director of the Gasprom station.

On Thursday, a group of Greenpeace activists occupied a gas station near Bulgaria's southwestern city of Blagoevgrad to protest against Gazprom's Arctic drilling.

Their banners said "Gazprom – Destruction of the Arctic" and "Free our Activists."

The gas station manager called the police and arrests were made.

Two activists were detained for climbing up on the station's roof and five other for chaining themselves to the fuel pumps.

The protestors, who were from six European countries – Austria, Bulgaria, Hungary, Romania, Slovakia and Slovenia, demanded the immediate release of Greenpeace activists who were detained and face piracy charges after protesting at a Russian oil rig in the Arctic Ocean.

Russian border guards seized the Greenpeace icebreaker Arctic Sunrise and its multinational crew in international waters last Thursday after Greenpeace activists scaled the side of the Prirazlomnaya oil rig in the Pechora Sea in a demonstration against Gazprom's Arctic oil drilling.

The suspects face up to 15 years in prison under the piracy case opened by Russian investigators this week, which Greenpeace dismissed as absurd, saying that the protest was peaceful and that the border patrol had seized the Arctic Sunrise at gunpoint.