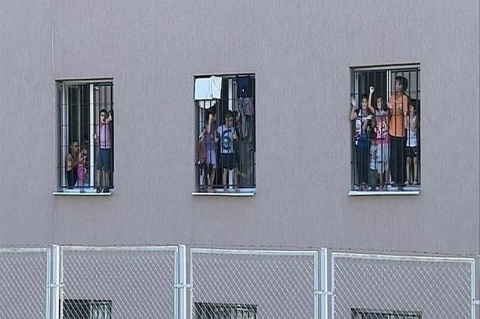 A photo of BGNES shows a typical Bulgarian refugee shelter, this one in the Sofia "Ovcha Kupel" district.

The Bulgarian Helsinki Committee (BHC), an independent NGO for human rights protection, demands the collective resignation of the State Agency for Refugees over the latter's treatment.

BHK insist the Agency has failed miserably in their task to provide shelter, medical treatment and food to the increased influx of refugees, particularly from Syria over the raging civil war there.

On Wednesday, BHK representatives have been allowed for the very first time to visit the just-launched last week refugee shelter in the Sofia suburb of "Vrazhdebna," and have found out the official information on it was false, as they label the conditions there "disgusting."

BHC describe the shelter as an abandoned for years, crumbling building, without heating, with broken windows, mold, lack of hot water or no water at all, an entire floor without electricity, non-functioning sewage, beds in the form of just mattress with one blanket for three people, complete lack of personnel, medical care, medications and even food.

Since their accommodation on September 18, the refugees - mainly women, mothers with babies, minor children and people with injuries caused by war – have received food deliveries only twice, and both times it has been provided by the Bulgarian Red Cross, private donations, the Syrian community in Bulgaria, NGOs and citizens.

As of Wednesday, none of the refugees has received from the State Agency registration as asylum seekers and temporary identity documents, due to them by law, which they can use to receive the same medical care that is accessible to Bulgarian citizens and social assistance of BGN 65 per month.

"BHC expresses its definite opinion that such treatment of refugees is not only an emblematic example of the red tape and indifference to the needs of people typical for Bulgarian State institutions, but also constitute inhuman and degrading treatment and display of white-collar cruelty of the highest order," the statement reads.

"As citizens of this country, we are accustomed to receive such treatment from the government. Yet we cannot and must not remain indifferent when it is extended to people fleeing the horrors of civil war, many of which are children," continues BHC.

According to the NGO, excuses of the leadership of the Agency that they were unprepared for the increasing number of refugees are not acceptable.

"The State Agency for Refugees is the national body that has been assigned the sole responsibility to provide the admission and protection of refugees entering Bulgaria," comment the human rights activists, stressing that Bulgaria annually receives European funding of EUR 500 000 to EUR 600 000 for the implementation of this task.

"Precisely the obvious failure of the leadership of the State Agency for Refugees to provide the minimum conditions of shelter, food and medical treatment fuels insinuations about the risks posed by the refugee that have alarmed the Bulgarian public - diseases, poverty, and crime, but not because refugees "import" them in Bulgaria, but because it is the environment that we as a country provide for them," BHK conclude.