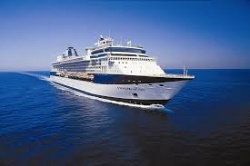 Cruise passengers will be the first arrivals at the new seaport of the Bulgarian Black Sea city of Burgas. Photo by crusit.bg

The new seaport of the Bulgarian Black Sea city of Burgas will be fully operational by the end of the year.

The first module of the new marine station in Burgas is to be completed on October 1st, announced Pavel Marinov, Burgas' Regional Governor.

The first passengers to arrive at the new station on October 5th will be tourists on board of the Millennium-class “Celebrity Constellation” cruise ship of the “Royal Caribbean International” cruise operator.

Five more cruise liners are scheduled to dock at the station by the end of the year when the passenger terminal will be fully operational.

The terminal will be equipped with the necessary technology for travel documents processing by Border Police.

An additional terminal and an office for the station’s administration will be completed by the start of the 2014’ summer season, according to the construction plans of the project’s contractors.