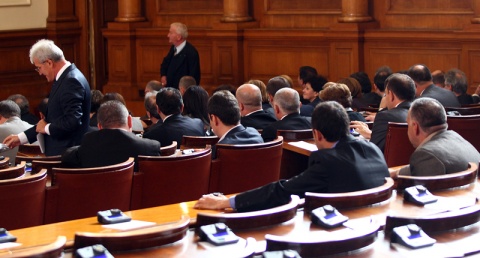 Bulgaria's center-right party GERB (Citizens for European Development of Bulgaria) refused to register for voting for a second day in a row on Thursday, thereby blocking the parliament sitting on the no-confidence motion it initiated a week ago.

A total of 110 MPs registered for voting, after which Parliament Chair Mihal Mikov declared a 30-minute break.

After the break, instead of asking the MPs in attendance to register electronically, Mikov asked the quaestors to count them, and declared the sitting open after being told that there were 207 MPs in the hall.

After the start of Thursday's sitting, GERB MPs headed out of the plenary hall.

On Wednesday, the sitting was cancelled due to the lack of a quorum (121 MPs in attendance), after GERB refused to register for voting, thereby boycotting the discussion on the no-confidence vote they initiated a week ago over the failed investment planning policy.

GERB leader Boyko Borisov vowed Thursday that the party would come up with a new proposal for a no-confidence vote by the end of the day.

In order for a no-confidence motion to pass, it has to be supported by 121 MPs. The Bulgarian Socialist Party (BSP) and the ethnic Turkish party Movement for Rights and Freedoms (DPS) have 120 MPs, but Delyan Peevski is not taking part in the work of the Parliament due to his undecided MP status after on June 14 he was elected Chair of the State Agency for National Security (DANS) and the Parliament cancelled the appointment five days later.