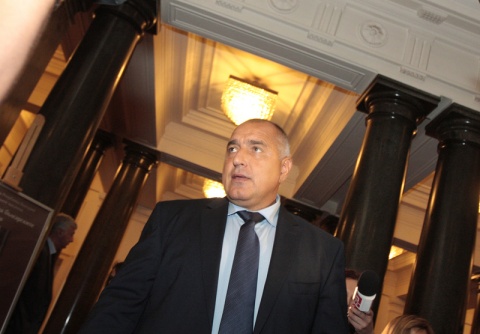 Boyko Borisov, leader of center-right party GERB and former Prime Minister, has said that the formation will request the resignation of Parliament Speaker Mihail Mikov on Thursday because he had failed to secure a quorum in Parliament for the debate on the no-confidence motion against the government.

"This is a responsibility of the majority. This is what it says. Why should I secure the quorum? All of us were in the hall. The opposition exists to obstruct," he explained in an interview during Thursday's morning broadcast of Nova TV.

Borisov was adamant that GERB (Citizens for European Development of Bulgaria) would not register for voting on Thursday unless ruling parties the Bulgarian Socialist Party (BSP) and the ethnic Turkish Movement for Rights and Freedoms (DPS) party managed to secure a quorum.

He said that GERB would prepare a new no-confidence vote by the end of the day but did not specify the topic.

"What debates? Should I participate in debates on the chimney of a house? This house has no foundations; this government has no foundations, what am I supposed to be debating? The no-confidence motion is an instrument for ousting the government and we are using it in its full capacity," the leader of GERB pointed out, as cited by Sega daily.

"At present Parliament has a makeup which does not meet public expectations or the election results," Borisov declared.

He pointed out that if BSP and DPS failed to secure a quorum and if the parliamentary group of nationalist party Ataka was absent, GERB would again refuse to register for voting, thereby showing that "this Parliament is impotent, it cannot work."

"Taking into account that they cannot secure Ataka, it becomes clear that Ataka is not an opposition party, it supports the government," he added.

On Thursday, Bulgaria's Parliament is to reattempt launching debates on the no-confidence motion against the socialist-led coalition government headed by Prime Minister Plamen Oresharski.

On Wednesday, the sitting was cancelled due to the lack of a quorum (121 MPs in attendance), after GERB refused to register for voting, thereby boycotting the discussion on the no-confidence vote they initiated a week ago.

The deadline for holding parliamentary debates on the no-confidence motion expires on Thursday.

In order for the no-confidence motion to pass, it has to be supported by 121 MPs. The Bulgarian Socialist Party (BSP) and the ethnic Turkish party Movement for Rights and Freedoms (DPS) have 120 MPs, but Delyan Peevski is not taking part in the work of the Parliament due to his undecided MP status after on June 14 he was elected Chair of the State Agency for National Security (DANS) and the Parliament cancelled the appointment five days later.

Last week, GERB initiated a no-confidence motion against the socialist-led coalition government over its failed investment planning policy. GERB MPs claimed that the newly established Investment Ministry was of no practical benefit and had only been wasting taxpayers' money on superfluous administration for its four months in existence.

BSP and DPS refuted the accusations as absurd.

The chances of the no-confidence vote succeeding are negligible.