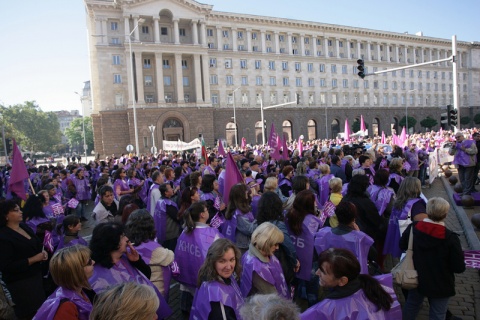 Papazov met with the demonstrators and told them the government has just voted to give the above amount which would come from the subsidy for the Posts from 2011.

Since 2011, there is an EU directive to give the Posts a State subsidy so that they can deliver letters and packages to the most distant areas of a respective country.

The Posts insist the State owes them BGN 22 M in subsidies for 2011, and the amount has been approved by the EU. The Bulgarian Commission for Communications Regulation, however, calculates the amount at BGN 12 M by using another methodology.

The Socialist-led government of Prime Minister Plamen Oresharski has inherited only BGN 2 M paid from the subsidy for 2013, thus with the BGN 6.5 M the total is below the BGN 12 M.

The demonstrators booed Papazov and asked what the money (BGN 6.5 M) would be used for.

The Minister explained the BGN 1.5 M will be enough to raise salaries by 10% - those with the lowest wages would get more than 10%, others - just 10%, while the administration of the Posts would not have a pay raise.

For November and December, the raise will be in the form of bonuses, and it will be officially included in the pay scale in 2014.

This failed to appease the demonstrators, who countered that 10% raise for a salary of BGN 330 a month meant nothing to them.

Papazov further promised there was no ongoing "hidden" privatization of the Posts.

Meanwhile, the trade unions warned that the rally was just the first small step and warned of looming nationwide strikes and protests in a number of sectors.