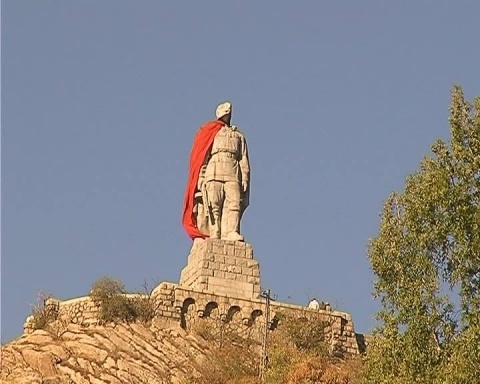 Saturday morning Plovdiv residents woke up to see the 10.5 m tall main figure of the monument draped in a red cloak, with a black scarf over his mouth. Photo by the Bulgarian National Television

The activists have been also questioned about the theft of the German flag from the German Consulate in the city.

The Soviet Army monument in Plovdiv emerged decorated with a black mask and a huge red mantle on Saturday morning while at the same time the German flag of the German Consulate located on “Saborna” ttreet in the city appeared to have been stolen, turning the eyes to the Union of Communists “Che Gevarra”, reported BGNES.

A number of alpinists needed several hours to clear the monument’s “decoration”.