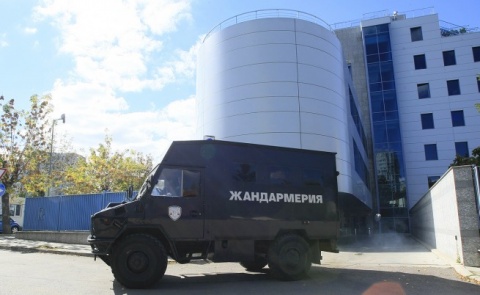 The offices of Risk Engineering in the Borovo district in the Bulgarian capital Sofia, photo by BGNES

Two former CEO's of Bulgaria's National Electric Company, NEK, Krum Atanasov and Ivo Lefterov, have been arrested Friday during the special operation against suspected fraud in the energy sector.

The news was reported Sunday by the Bulgarian Trud (labor) daily. According to the publication, Sabin Sabinov, CEO of Worley Parsons in Bulgaria has been arrested as well.

Worley Parsons is the company that was hired by NEK for the consultancy of the project to build a second, Russian-sponsored Nuclear Power Plant, NPP, in the Danube town of Belene.

Risk Engineering of Bulgarian businessman Bogomil Manchev is a subcontractor for the consultancy.

The special police operation was conducted jointly by Bulgaria's State Agency for National Security, DANS, and the Interior Ministry, after a tipoff that important documents might be destroyed.

Kozloduy is the site of Bulgaria's only NPP.

The three – Atanasov, Lefterov, and Sabinov – have not been officially charged, pending the analysis of documents seized from the offices of Worley Parsons and Risk Engineering.

Immediately after the news made headlines, rumors started circulating that Bogomil Manchev has been arrested. His office, however, informed that he is currently abroad, has been notified about the raid and had promised to return to Bulgaria to cooperate with the investigation. Manchev has also ordered all his employees to help the authorities.

He firmly denies any of the allegations and says he was never involved in embezzlement and mismanagement, stressing the full legality of his business.