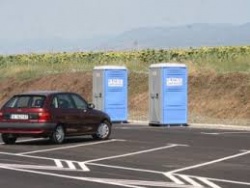 A second chemical toilet cabin on Bulgaria’s Trakiya highway has been stolen, reported a local newspaper on Friday.

Speaking to Bulgarian newspaper 24 Chasa , Tihomir Gyokov, the owner of the company that has installed 44 new toilets on a section of the Trakiya highway, reported that another one of the cabins has been stolen.

A similar incident occurred a month ago, just two months after the toilets had been installed.
The police have not caught the thieves yet.

Gyokov suspects the same perpetrators may be responsible.

The toilet which weighted around 280 kg in total, comprising of a cabin and of a 200-kg reservoir of water, was probably lifted from the parking of the Bulgarian town of Nova Zagora with specially prepared equipment.

A total of 44 chemical toilets on 22 different spots of the section between south-Bulgarian cities Stara Zagora and Burgas on Trakya highway were installed on August 1, as no such equipment existed there before.