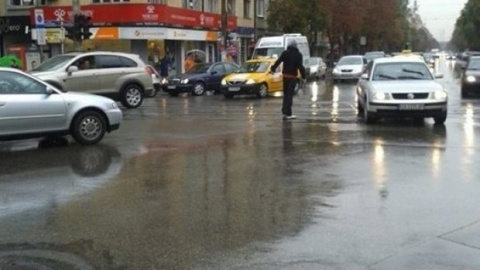 A photo showing Krastev as he directed traffic quickly became popular on social media, with many citizens and pundits praising him for his courage. Photo by bTV/Facebook

A young Bulgarian man who bravely stepped in to direct traffic after a traffic light glitch at a busy intersection in the capital Sofia has been slapped a fine by local authorities.

Kosta Krastev was passing by as he saw a heavy traffic jam at the Pette Kyosheta (“Five Corners”) intersection in downtown Sofia on Monday.

With no traffic officer in sight, Krastev decided to take matters into his own hands and started directing traffic.

“Drivers swore at me for the first five minutes, as I was not wearing any jacket. But then they started following my movements,” he later told the bTV channel.

The man said he relied on his “intuition” as he succeeded in directing traffic for approximately an hour.

Several police cars passed during that time, with police officers failing to react, according to local media.

A photo showing Krastev as he directed traffic quickly became popular on social media, with citizens and pundits praising him for his courage.

But Bulgarian traffic police authorities have now issued him a fine of BGN 300 (EUR 153) over the incident, noting that he created a risk for himself and others.

“I am unemployed, I cannot afford to pay this,” he told the Bulgarian National Television on Friday.