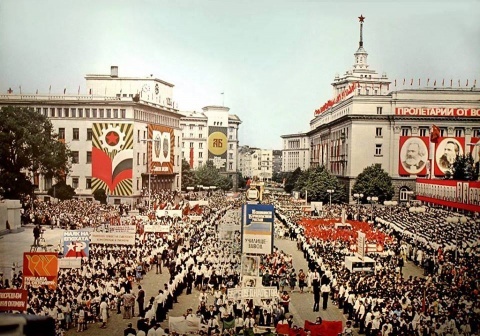 A file photo from the Communist parades held in the Bulgarian capital Sofia until 1989.

The majority of Bulgarian youth don't know anything about key events from the time of the Communist regime, both in their country and in Eastern Europe as a whole.

18% of the respondents have said they wanted to live during the rule of Communist dictator Todor Zhivkov. These are young people mainly from the Roma minority, unemployed or living in the villages.

The data comes from a poll conducted in June 2013 among 1 100 Bulgarians between the ages of 15 and 35, conducted by the National Center for the Study of Public Opinion, NZIOM.

Half of the respondents did not know anything about the death of dissident writer Georgi Markov or about his work; 40% said they never heart of the Belene and other death camps, and over 60% have no idea what Bulgarian soldiers were doing in Czechoslovakia in 1968.

42% of young people in Bulgaria don't know that Stalin and Hitler were dictators; over 50% don't know about Nazi concentration camps and for 56% Holocaust does not mean anything.

85% have no idea about the Polish labor union Solidarnost and its role for the end of the Communist regime and 88% have never heart of the Molotov–Ribbentrop Pact, among others.

According to polling experts, the rule of the country before November 10 1989, is overall seen as undemocratic, but some of its still-boasted benefits have not been forgotten and impress enough young people.

The experts stress the results show that history books must be rewritten so that Bulgarian youth learn about the crimes of the totalitarian regimes, including Communism and Nazism.