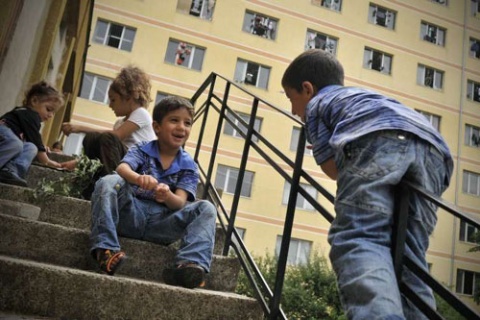 Young asylum-seekers play in front of a reception and integration centre in Bulgaria. Photo by UNHCR/B.Szandelszky

The mayor of Sofia's Kremikovtzi district Ivaylo Panev has expressed his dissatisfaction at the opening of a new refugee reception center.

"It is not normal to have a refugee camp at the entrance of a capital. This does not happen in any other country", Panev commented in an interview for the Bulgarian Telegraph Agency (BTA).

Earlier on Wednesday, the Deputy Minister of Interior Vasil Marinov announced that a new reception center was opening doors in Sofia's Vrazhdebna neighborhood on Wednesday.

He explained that the building located on the Botevgradsko Shose Blvd had been used as a home for disadvantaged children some 8-9 years ago and had remained closed since then.

"My consent for using this building to accommodate refugees is not necessary, since it is owned by the state", Panev added. He also warned that the resources currently allocated for refugees were insufficient and the food and medicine supplies were scarce.