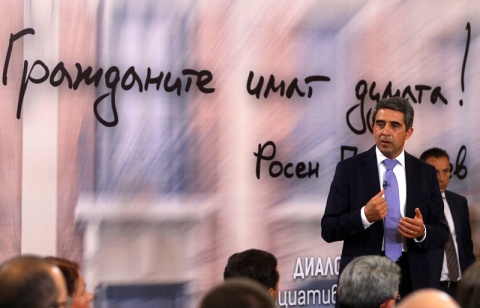 Bulgarian President Rosen Plevneliev has described 2013 as the year "not of politicians but of civil society."

"Civil society came on stage, attracted the spotlight, and now sets the agenda of institutions," Plevneliev declared Tuesday at the opening of the three public debates initiated by him.

The topic of the first debate within the "Dialogue with Civil Society" forum was the market economy, while the next two discussions are to stress justice and the media, according to reports of dnevnik.bg.

Plevneliev cited four sources of enrichment for oligarchs, including the governance of public money, public procurement, privatization, and the grey sector of the economy, adding that the elimination of these sources of funding would help society curb the power of "this small circle of people who get rich at their expense."

"By restricting these four sources we could very efficiently achieve a better economy – through rules for governing public money, typified electronic public procurement procedures, instead of sealing classified contracts," he said.

He argued that the privatization efforts had to target strategic investors, not well-connected people, Bulgaria had to reform its security sector, connect databases and work with foreign partners against the grey sector and the underworld.

Plevneliev, as cited by Sega daily, vowed to try to bring together anti-government protesters and supporters of Bulgaria's socialist-led coalition cabinet.

Plevneliev reiterated his desire to be a uniting figure in the country.

"I have never said anything else. I cannot be a disuniting force by beating around the bush and keeping silent," he declared.

He also pointed out that Bulgaria had run up a deficit, its budget was imbalanced, "i.e we are living on borrowed money and out children will have to foot the bill. I have nothing against social measures, but they must be implemented with money already earned, not at the expense of the next generation," Plevneliev said.