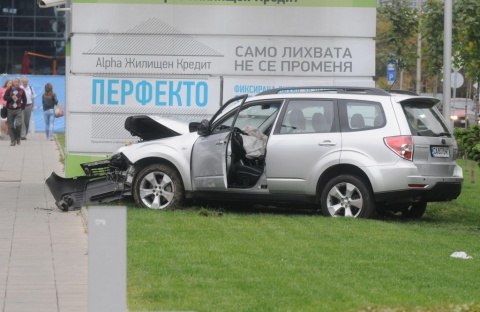 A Subaru Forester SUV rammed into the parking lot of the shopping center "The Mall" in Sofia Friday evening, photo by BGNES

A broken pedal is to blame for the hellish crash on "Tsarigradsko Shosse" in the Bulgarian capital Sofia.

A Subaru Forester SUV rammed into the parking lot of the shopping center "The Mall" Friday evening, injuring 5 people, including the driver.

Three people sustained serious injuries, however, their lives are now out of danger, including the one of the 24-yeal-old man, who was hurt the most severely.

The diver, a 76-year-old Ukrainian citizen, apparently lost control of the SUV and smashed into the three pedestrians. He tested negative for alcohol. The weather, which was very rainy and windy, could have been a contributing factor.

He has told police that the pedal of his SUV suddenly broke, causing him to lose control of the vehicle.