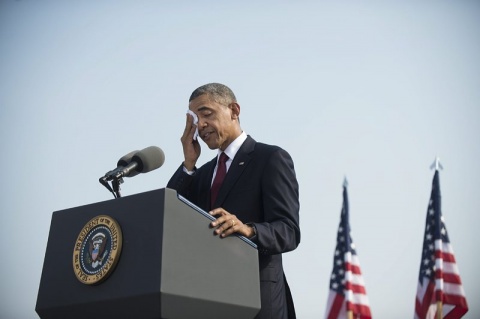 US President Barack Obama wipes his face as he delivers remarks during a remembrance ceremony for the 12th anniversary of the 9/11 terrorist attacks, at the Pentagon in Arlington, Virginia, on 11 September 2013.. Photo by EPA/BGNES

US President Barack Obama observed the 12th anniversary of Sept. 11, honoring those who perished in the worst terror attack in US history.

“Together we pause and we pray,” Obama said today at a ceremony at the Pentagon just outside Washington. “We pray for the memory of all those taken from us. Our hearts still ache for the futures snatched away.”

Obama, joined by Defense Secretary Chuck Hagel and Martin Dempsey, chairman of the Joint Chiefs of Staff, laid a wreath to honor Pentagon victims, their families and first responders.

He said the nation reaffirms the “values and virtues” of those who perished and that the nation will remain resilient in their honor.

“There’s no trouble we can’t endure and no calamity that we can’t overcome,” Obama said. Americans will “carry on, no matter how dark the night nor how difficult the days.”

Earlier, the president, joined by first lady Michelle Obama and Vice President Joe Biden and his wife, Jill, along with White House aides, gathered on the South Lawn of the White House, where flags were at half-staff.

They stood silent at 8:46 a.m., the time on Sept. 11, 2001, when American Airlines Flight 11 smashed into the North Tower of the World Trade Center in New York City. Taps were played at the end of the moment of silence.

“On September 11, 2001, no matter where we came from, what God we prayed to, or what race or ethnicity we were, we were united as one American family,” Obama said in a proclamation issued yesterday. “May the same be said of us today, and always.”

Twelve years after terrorists killed 2,977 people -- beginning with American Airlines Flight 11's crash into the north tower of the World Trade Center at 8:46 a.m. on September 11, 2001 -- observances were held at the sites of the disasters.

Memorial services were also conducted by lawmakers on Capitol Hill. Obama also planned to participate in a service project in the afternoon in the Washington area.