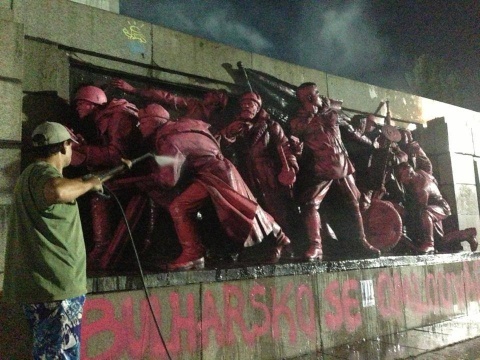 Nikolay Kolev, a Bulgarian poet, writer and dissident from the time of the Communist regime, has been indeed the person charged with disorderly conduct for attempting to paint pink the Red Army memorial in Sofia.

The emblematic date of September 9, considered both the date of Bulgaria's anti-fascist uprising in 1944, and the beginning of the Communist regime, continues to polarize society in the country.

Bosiya has been kept behind bars for 10 hours in the First Sofia Police Precinct. He has been fined, while Regional Prosecutor, Evelina Hristova, later pressed charges against him under article 1, paragraph 325 from the Penal Code for "indecent actions, grossly violating public order, representing obvious disrespect for society." This crime is punishable by imprisonment for two years or probation and public reprimand.

Kolev had issued a warning about his intentions and had notified the Sofia City Hall and the police.

On September 8, he had also written in his blog the following: "Tomorrow, I will paint in pink, the color of pacifism, the Soviet Army monument, and will then go the US Embassy to paint the monument of the American pilots, who perished when bombing peaceful Sofia citizens during World War II."

Bosiya has been met at the Red Army memorial by large police force and arrested immediately after starting to paint.

Kolev most recently made headlines with his letter to Bulgaria's six leading institutions, making known his plans to throw tomatoes at each. He proceeded with the action and was arrested then as well.

The judges, however, dismissed the prosecution's charges on grounds political protest is legal and cannot be deemed hooliganism.

The prosecutor's office has also clarified the confusion as many local media published reports on Tuesday that Bosiya has been arrested on August 21 over the Prague Spring tribute, when unknown street artists painted the Red Army monument pink.

On that morning, in honor of the 45th anniversary of the Soviet/Warsaw Pact crackdown on Prague's Spring, the monument "woke up" with the Red Army soldier figures painted in pink and with the inscriptions in Bulgarian and Czech "Bulgaria apologizes" ("Bulharsko se omlouv?").

Bulgaria was the first country to insist on military invasion to crush the Prague Spring and the last one to apologize. The pink color is believed to be a tribute to Czech artist David Cerny, who in 1991 painted pink the Soviet tank memorialized in Prague as a supposed symbol of Soviet liberation.

Upon being informed about the pink graffiti, Sofia Regional Governor, Rosen Malinov, appointed by the left-wing Bulgarian Socialist Party, BSP, immediately sent a request for a probe to the prosecution, and issued an order with a 3-day deadline to clean the monument.

The Russian government also announced it intended to formally request from Bulgarian authorities that they punish people who sprayed the pink color on the Monument.

Meanwhile, the artistic apology for Bulgaria's support of Warsaw Pact troops, which crushed Czechoslovakia's Prague Spring uprising in 1968, was hastily removed overnight when in the cover of the dark unknown volunteers rubbed the monument clean.

No one has been charged for the August 21 painting.

The prosecutor in the case, admitted his office confused media about the two incidents – August 21 and September 9, when Bosiya was arrested.

Meanwhile, Kolev encouraged the street artists, but advised them to carry on their protest in broad daylight.

"I want to tell these children that when they do a good deed, they should not do it anonymously and in the dark. They must do it openly," Kolev writes.