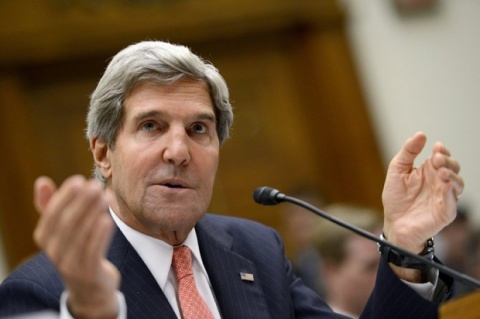 US Secretary of State John Kerry is pushing for international support for military action in Syria during a four-day trip to Europe. Photo by EPA/BGNES

The US Secretary of State, John Kerry, has emphasized Monday that the solution to the Syrian conflict must be "political not military."

Kerry spoke during a joint press conference after meeting in London with Foreign Secretary William Hague.

He stated that Syria can avoid military strike if its President Bashar al-Assad immediately turns in all chemical weapons he has in his possession, but voiced strong doubt it will happen.

Kerry stressed the US had no illusion that there was a military solution for Syria, but the latter should not have impunity in deciding to massacre an endless number of its own people.

The United States has the full support of Britain on Syria despite the fact that London will not join military action, Hague said at the news conference

On Sunday, after a meeting in Paris, the US Secretary of State informed he and Arab League foreign ministers have agreed that the Syrian president's alleged use of chemical weapons, such as sarin gas, has crossed a "global red line".

He also stated there that there was no military solution for Syria.

Kerry is on a four-day trip to Europe to push for international support for military action against Assad.

Meanwhile, back at home, US President, Barack Obama, is facing a tough week ahead of lobbying in public and private meetings to win the approval of the Congress for a limited rocket strike against Syria.

The BBC reports that in an interview for US broadcaster PBS, to be broadcast on Monday, Assad has "suggested that there would be, among people that are aligned with him, some kind of retaliation if a strike was made."

Arab countries are divided on the question of military strikes on Syria. Some like Saudi Arabia and Qatar are in favor while others like Syria's neighbors Jordan and Lebanon are far more cautious, worried about the conflict spreading across their borders.

Russia and China are also firmly against any military intervention.

The US accuses Assad's forces of killing 1 429 people in a chemical weapons attack in the Damascus suburbs on August 21.