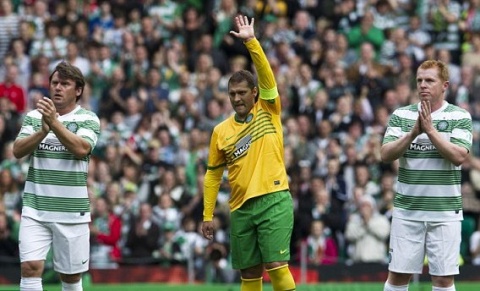 Tens of thousands of football fans gathered in Glasgow to witness football stars from across the Albion play a charity game in honor of Bulgarian midfielder Stiliyan Petrov, who is battling leukaemia.

Emotions ran high during the game at the Celtic Park stadium, and the 60,000-strong audience did not want to leave after the end, reports the Daily Mail.

The match was a fixture between a Celtic representative team, and a selection by Stan, including countrymen Dimitar Berbatov and Martin Petrov, as well as the likes of John Terry, Kenny Dalglish, Gareth Barry, Henrik Larsson and Gabriel Agbonlahor.

Stan himself played through the 31st minute for the crowd, which had sold out the Celtic Park. He then returned to play for Celtic in the last 5 minutes.

The game was interrupted in the 19th minute, for what is known as Stan's minute, after the midfielder's traditional number.

"You've made today special for me, my family and for all these players. Thank you very much," Petrov said after the end of the game.

"I said I wouldn't cry but I couldn't hold it. It was an absolute privilege," he told BT Sport. "I'm just happy to see my family every day."

Stiliyan Petrov, a long-time player for Celtic and Aston Villa, which he also captained, was diagnosed with acute leukaemia in March 2012.

In May 2013, Stan officially announced his retirement from football.