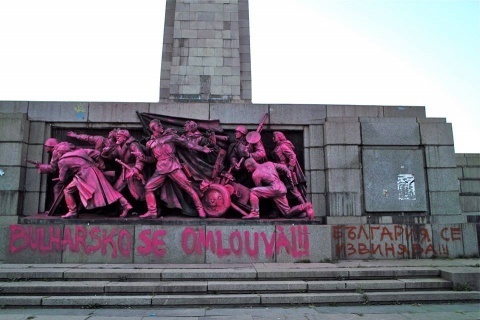 On August 21, the Sofia's Soviet Army Monument "woke up" with the Red Army soldier figures painted in pink and with the inscriptions in Bulgarian and Czech "Bulgaria apologizes" ("Bulharsko se omlouv?"). Photo Asen Genov, Facebook.

Intended or not, the painting of Sofia's Red Army memorial last month was a nod to Bulgaria's historical ties to the Czechs.

It happened again. On 21 August Sofia citizens woke up and saw the huge sculpture group painted once more – this time in pink.

Secretly painting the Red Army memorial in downtown Sofia has become a tradition. Two years ago, one of the many acts made international headlines. A Banksy-like band of guerrilla artists used the cover of the night to convert the statues of the Soviet warriors into Captain America, the Joker, Superman, Ronald McDonald, and other symbols of global U.S.-oriented culture. Now, in the summer of 2013, the soldiers were painted pink. An inscription in Bulgarian and Czech was added in big, pink letters: "Bulgaria apologizes."

When the statue was painted in 2011, a hot debate broke out about what it meant. One the most plausible explanations was also the most striking – that a new generation was parodying the hypocrisy of older generations that changed allegiances with the wind – yesterday it blew with the Soviet Union, today with Captain America. Yet this basically leftist message remained misunderstood by the Bulgarian left for a simple reason: to be leftist in Bulgaria means to be Russophile and hence not to desecrate Soviet memorials.

The new pink action 21 August, however, left no doubt: it was purely political. That was the day Warsaw Pact tanks invaded Czechoslovakia in 1968, putting an end to Prague Spring. Archives show that the formal proposal to "assist the Czechoslovak comrades" came from Bulgaria's communist leadership, which later provided troops for the comradely affair. First to propose, Bulgaria was last to apologize. But it did twice – with a parliamentary resolution in 1990 and during a presidential visit to Prague in 1997. Now, enter the third apology, painted pink.

Artistically, there is a Czech archetype for it. In 1991, Czech artist David Cerny painted a Soviet tank pink in Prague. After the paint was removed and Cerny arrested, 15 Czech lawmakers repainted the tank. Finally, the monument was moved to a museum. Obviously, the Bulgarian mastermind possessed background knowledge and wanted to trigger a similar reaction at home.

Of course, the noise was big and more-or-less expected. Center-right pundits applauded and used the occasion to once again raise the issue of removing the monument from Sofia's center. Czech newspapers covered the story extensively. Moscow demanded the perpetrators be found and prosecuted. The Russophile left denounced the action as stupid barbarity – and cleaned the bronze, using, in their turn, the cover of the night.

One thing in all these passions, frustrations, and covert actions remains very interesting, at least to me: The anonymous artist (the police are after him or her) seems to have had a grasp of how Bulgaria's modern history intertwines with the Czech Republic's.

Some 130 years ago, that wouldn't have been surprising. Few people know that enthusiastic Czechs helped shape a new Bulgaria after the end of Ottoman domination. Driven by Slavophile ideology or simply by brotherly love, they flocked in large numbers from the Austro-Hungarian Empire. Having not yet a state of their own, they we eager to assist in the birth of a fellow Slavic one, rising from the ashes of another empire.

There were true sacrifices. Journalist Vladimis Sis was so deeply involved with the Bulgarian cause and suffering during the Balkan wars that this contributed to his imprisonment in communist Czechoslovakia (he died in jail 1958). Painter Jan Mrkvicka lost his two sons in Bulgaria, one of whom was a Bulgarian officer in the wars. And there was true interest: Bulgaria was an issue in Czech newspapers and a theme in Alfons Mucha's paintings.

It is not surprising that communism reinforced the ties between the two countries. In the small world of COMECON, Bulgarians liked quality Czech consumer goods – and Czechs (and of course Slovaks) liked the Bulgarian seaside. Every Bulgarian over 40 remembers classic Czechoslovak TV series like "The Woman behind the Counter" and "The Hospital at the End of the City." At least two Czech restaurants still serve quality food in downtown Sofia. Culture was promoted and translated on both sides. Friendships and marriages flourished.

The romance ended along with communism – and that is also understandable. Both Czechs and Bulgarians opened up to the West, trying to forget the fellow campmates as quickly as possible. It is less understandable, though, that both societies have done so little to re-forge their bond in recent times.

Even the rare connections are treated with suspicion. Czech authorities often make a case out of illegal Bulgarian workers. In February, Bulgarian protesters blamed Czech company CEZ, which distributes electricity in western Bulgaria, including Sofia, for high energy bills and attacked its offices. Even Cerny, the artist, does not have a good name in Bulgaria. In 2009 he depicted Bulgaria on a pan-European installation as a ... Turkish toilet.

This lack of interest cannot be attributed only to Bulgaria and the Czech Republic. It is more or less true for most of the countries from the former Eastern bloc. Economists may postulate that we have few things left to trade. Shrinks may say that we attribute our own frustrations to our next of kin. And politicians (I have interviewed many Czech leaders, including presidents Vaclav Havel and Vaclav Klaus, prime ministers Petr Pithart and Vladimir Spidla, and Foreign Minister Karel Schwarzenberg) feel obliged to say that things may get better.

They are getting better indeed. Czech tourists have rediscovered the Black Sea – and Bulgarian customers have rediscovered cars with Czech brand names. Instead of cursing Bulgarians for anti-CEZ feelings, some part of the Czech public opinion saluted them for bravery. And now the pink bronze ... is it too a sign of the rekindled brotherhood?

We'll see. The painting action happened during the Bulgarian protests, the biggest domestic confrontation of the past decade and a half. So the mysterious painter is more likely an anti-government protester looking for publicity than a multiculturalist resurrecting Czech-Bulgarian historical ties.

Good news will come not with single revolutionary act, but with hard work based on common interest. Bulgarian and Czechs, both well-known and even ridiculed for their preposterous rationality, should know best.

Boyko Vassilev is a moderator and producer of the weekly Panorama political talk show on Bulgarian National Televison.