A Message of Renewal and Reform 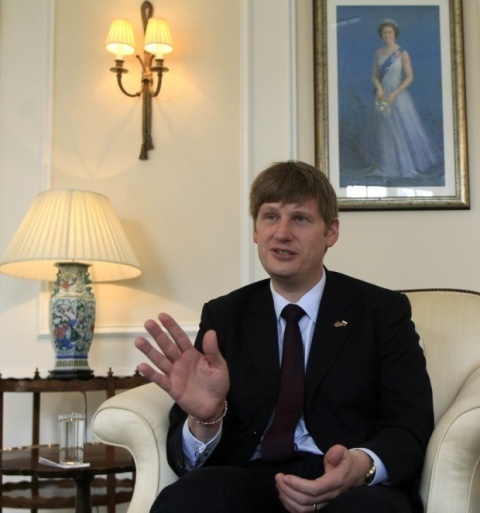 The Diplomatic Channel section of Novinite.com (Sofia News Agency) and Novinite.bg is publishing the notes for a speech delivered by British Ambassador to Bulgaria on the new political season in the country.

As Parliament resumes, HMA Jonathan Allen shares ideas about the need for a credible reform package to restore trust in politics in Bulgaria. Originally given at Sofia. These are the speaker's notes, not a transcript of the speech as it was delivered.

September always has a “back to school” feel about it, even for those of us who are long past our student days. It is usually a time of renewal, as refreshed and relaxed people return to their tasks with vigour and new ideas. In that context, talks have started between parliamentary political parties to find agreement on national priorities for the coming parliamentary term.

However, this year, it is not just the government and the political parties who are returning energised to their work: the protesters will be back as well. So over the past few weeks I have been talking to political leaders and ordinary Bulgarians alike on how those national priorities should reflect the message of the protests. I have done so not from a position of presumed superiority, but because I care deeply about Bulgaria and its future. As I argued in a speech in April, I believe Bulgaria has enormous potential and am an optimist for its future.

There are many opinions about the motivations of the protesters, and speculation as to the evolution of the protest movement. The political parties in and outside parliament all make different claims. It is difficult to be sure who is right. But one thing is indisputable: the protests started after the hugely controversial appointment of Delyan Peevski.

It is now a matter of historical record that this appointment was rejected comprehensively by Bulgarians and that it damaged Bulgaria’s international reputation. What is more worrying is that in all my conversations with the extremely sensible and serious people who made this decision, I have not yet heard any serious or sensible reason for it. In its absence, the vacuum is inevitably filled with speculation and many people assume the worst.

The appointment of Mr Peevski also reflected deeper problems in Bulgarian politics. In particular it reflected the lack of faith of the electorate in Bulgarian politics and politicians of all parties, in and outside government. This is damaging for Bulgaria and her future prospects. For all of us who care about Bulgaria’s future, it is vital that Bulgaria’s politicians now look to recover their damaged reputation, at home and abroad. I hope that all political parties will now have the tough discussions, and take the big decisions, needed.

From my conversations, people do not feel that politics (at national and local level) is accountable and are not confident that their interests are represented. They feel that circles of corruption and vested interest create a politics that serves themselves rather than Bulgaria. Even those who support individual political parties can have a low trust in politics in general. Business tells me the same thing: that Bulgaria is not a level playing field; that connections, rather than free competition, defines the market.

It seems to me that the most important message of the protest movement is not about supporting or opposing one or other political party or bloc, in or outside parliament. It is about making a decisive break between illegitimate business interests and politics, and about improving standards in public life.

Much attention will focus over the coming days and weeks on the political response to the uncertainty and instability that currently exists. There will be talk of deals and election dates. The political parties will look for every opportunity to show each other at a disadvantage; the fight will be dirty. That is what political parties do, in every country, including mine! It would be a tragedy if in the midst of all this politics the initial impulse of the protests was lost; if that instinctive desire to make a decisive change in political standards was overwhelmed by politics as usual.

So as parliament resumes, I want to share some ideas that have been made to me by Bulgarians, in person and via twitter, facebook and email, for a legislative programme that would truly demonstrate that the people’s representatives are listening to the people. I group them under three key themes.

Let us see a “presumption of transparency” throughout national and local government, and those businesses that receive public funds. Instead of the current default of secrecy, everything should be published, unless there is a very good reason not to. This means that:
• Budgets should be published for every state firm and municipality at the beginning of the financial year, and at its end. They should set out what they spent their money on. It is taxpayers who own national and local government; they deserve to know how their money is spent. In the UK every item of expenditure over ?25,000 is published and all government data is made available to business and citizens at data.gov.uk
• It should be made much easier to trace who controls businesses (including, crucially, in the media). If a business’ ownership is not clearly set out, then there should be a presumption against them receiving public funds and being entrusted with discharging public responsibility.
• There should be greater use of open discussions on the programme and plans of Ministries and other public bodies, broadcast online. The practice of allowing civil society, NGO and business representatives into the debate should be built upon and advanced, including at local level.
• Increased transparency helps prevent corruption and bribery. E-government, e-justice and e-procurement are all vital policies on which we have heard much over the years, but seen little. They allow easy comparison of performance and decision-making, whilst removing opportunities to extort bribes. They also encourage compliance: law-breakers never know when they will be being monitored, as the National Revenue Agency has shown through its success in internet monitoring of business.
• Impact assessments should be serious processes of full consultation, not box-ticking exercises carried out with a shrug by officials. A proper impact assessment ensures that parliament can vote with the full knowledge of the consequences of doing so, and media, business and civil society can participate and scrutinise as well.
• Effective action against bribery and corruption is about much more than laws. But the laws are a vital platform. Right now, Bulgaria’s laws are some of the weakest in the EU. It is widely agreed that the UK and US have the toughest legal environments against bribery and corruption. Why should Bulgaria not borrow the best from those two legal codes, along with others, to create the toughest and best laws for themselves?
Hold politics accountable and regulate MPs
• Parliamentary scandals happen all over the world. In my own country, there have been outcries over links between MPs and lobbyists and over MPs’ expense claims. The result has been much tougher scrutiny of MPs’ business interests and links and over their behaviour. As my own country has shown, it is possible to do so without compromising MPs’ independence and integrity.
• Establishing a tough, independent regulator of parliament and deputies would be a start to restoring trust in the links between deputies and legitimate business. The regulator would hear all cases publicly and transparently.
• Similarly, a law to regulate lobbying and ensure that relations between business interests and MPs are transparent and understood has been on the priority list of at least the last three governments. It is time for action!
• Many Bulgarians do not believe that the true sources of party financing are fully disclosed. Comprehensive laws, with strong penalties and stringent investigative and oversight powers to a regulator could help give confidence about the source of this funding.

Enforce the rules you already have!

• Bulgaria sometimes seems to have legislation and regulation without enforcement. There is no simple answer to this. Clearer guidance on where regulators and the judicial system should focus its attentions would help, as would clear prioritisation of caseload to ensure a focus on the most serious.
• Some of Bulgaria's regulators are impressive and respected, for example, the Ombudsman. But in other cases, regulators seem to lack independence or real energy to tackle their areas. Take the independent energy commission. We have now had five different chairpersons of the commission in 12 months, which is remarkably high turnover for an independent role. It seems that Prime Ministerial "suggestions" are immediately followed by commission "decisions" that are exactly the same. The Competition Commission in most countries is one of the most active; not so in Bulgaria. These bodies need to be properly independent of government and an appointments process needs to be enshrined in law to ensure high quality people are selected.

I have no doubt these ideas could be improved and added to. But they represent ways to make politics more open and honest. Those that object need to explain which side they are on, in the fight between on the one hand murky links between business and politics, and on the other an effort to clean up public life. Those that object need to explain how they will take this forward differently and better, in a way that is credible for Bulgarians.

Right now, there is a message out there of renewal and reform. The political parties, all of which have been the target of the protesters, have not shown any signs that they are listening to that message. If they do not listen, they risk irrelevance in the eyes of an increasingly sophisticated electorate that does not accept the status quo. A credible reform package in the current parliament would be a big start to regaining trust.