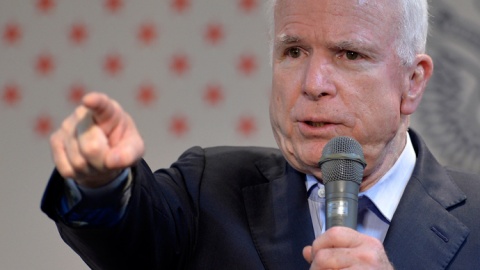 "The president apparently wants to have a kind of a cosmetic strike, launch a few missiles and then say 'Well, we responded'," McCain said during an interview with Jay Leno on NBC's "The Tonight Show."

"To our everlasting shame, not one single weapon from the USA has reached the hands of Gen. Idris and the Free Syrian Army," McCain said. "That is shameful, in my view."

If he were president, McCain said he would bomb the regime's runways to prevent military aircraft from taking off, create a safe zone and get weapons "to the people who are fighting and dying as we speak," NBC News reported, as cited by UPI.

The 2008 Republican presidential nominee acknowledged that there was little public appetite for U.S. military involvement, but said “the option of doing nothing, in my view, is even worse.”