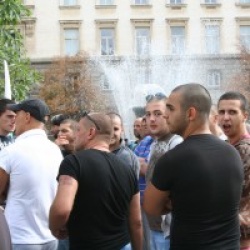 A photograph of Sergey Antonov for OFFNews shows some of the supporters of Bulgaria's Socialist-endorsed government.

Bulgarian Prime Minister, Plamen Oresharski, told his supporters Thursday he was fully aware of the need to establish work groups to debate current and important issues in the country.

"These groups must and will include representatives of the civil society, the government, and the Parliament," he stated during a meeting with members of the initiative "For a New Public Contract," who support his Socialist-led Cabinet.

They paid him a visit Thursday, walking inside the building of the Council of Ministries, singing the song "We Are Here to Stay" from the popular Bulgarian movie "Band without a Name."

The meeting took about one hour.

Participants handed to Oresharski a second petition in his support with close to 400 000 signatures, bringing the total to 700 000.

One of them, Petar Vitanov, asked rhetorically why President, Rosen Plevneliev, was not acting to summon the National Security Council, as he did when Delyan Peevski was appointed Chief of the State Agency for National Security, DANS.

"This is of prime importance as the war (Syria) is already knocking on our doors," said Vitanov.

The appointment of controversial media mogul and lawmaker Delyan Peevski to lead DANS sparked record-long antigovernment protests, which are now in their 77th day.

The group, which first gathered outside on Independence square, included mostly older people, even a 103-year-old man, but the site OFFNews writes that their reporter and photographer have also spotted a number of young men with shaved heads, clearly trying to hide from the cameras.

The group entered the government's headquarters without the police disturbing them in any way.

The 103-year-old man told journalists that he supported strongly Oresharski and was happy with his BGN 350 a month retirement pension.