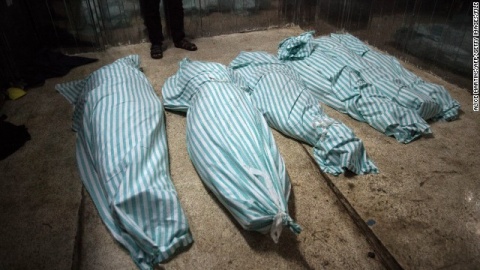 The US says it will release its own intelligence report into the incident at Ghouta, a suburb of the capital, in the coming days. More than 300 people reportedly died there. Photo by CNN

US Vice President Joe Biden has said there is "no doubt" the Syrian government used chemical weapons and it must be held accountable.

Saying "there is no doubt who is responsible for this heinous use of chemical weapons attack in Syria: the Syrian regime," Vice President Joe Biden signaled Tuesday that the United States - with its allies - was ready to act.

"Those who use chemical weapons against defenseless men, women and children should and must be held accountable," Biden said in a speech to the American Legion.

The vice president's remarks echo those made by other U.S. officials in recent days, as well as many of the nation's foremost allies.

UN weapons inspectors are set to return to the site of last week's suspected attack near Damascus on Wednesday.

Their evidence-gathering visit was delayed by a day after they were fired on.

The United States, meanwhile, is conducting its own investigation. The intelligence report will include forensic evidence and intercepted communications among Syrian military commanders, according to unnamed officials, cited by CNN.

The vice president said that beyond whatever inspectors do or do not find, common sense and the recent past point to one culprit.