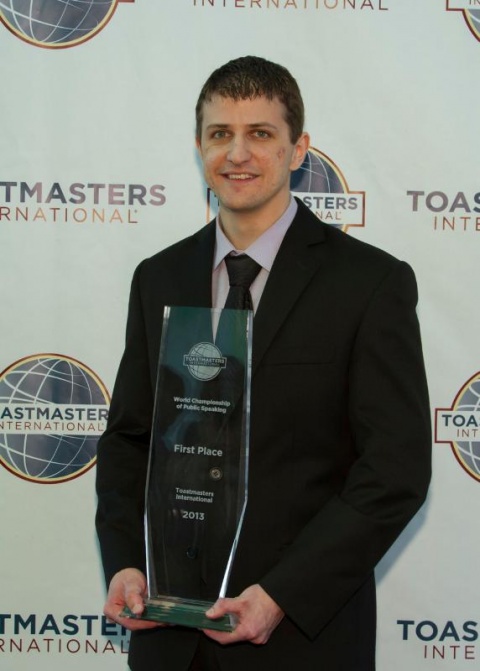 Presiyan Vasilev, a Bulgarian national living in the US city of Chicago, has won the Toastmasters World Championship of Public Speaking on Saturday, Aug 24, in Cincinnati, Ohio.

Vasilev, 30, a sales professional from Chicago, along with eight other final contestants, reached the championship level after several eliminating rounds that began six months ago with 30 000 participants from 122 countries across the globe.

The Bulgarian won with his humorous speech titled "Changed by a Tire," in which he tells a story about asking people for help, believing many will make fun of him. He suddenly discovered that his weakness turned into strength, because he realized weakness was in refusing to reach out."

"I stopped to change a tire; instead the tire changed me," Vasilev said.

Vasilev joined Toastmasters three years ago and competed in many speech contests before reaching his goal of earning the title of World Champion of Public Speaking. In his acceptance speech, he said, "Toastmasters is the best personal development laboratory you can find."

Vasilev immigrated to the United States 11 years ago from Sofia in search of "multicultural variety" and self-improvement.

He says he looks forward to returning the favor and wants to use his championship experience to mentor others. He offers the following advice: "Never give up!"

Speakers delivered five- to seven-minute speeches on wide-ranging topics, and were judged on content, organization and delivery.

The contest was held in the Duke Energy Center in Cincinnati

Second- and third-place winners were Shurooq AlBanna from Dubai, United Arab Emirates with her speech, "Finding the Pearl" and Kingi Biddle from Rotorua, New Zealand, with his speech titled "My Sitting Place."