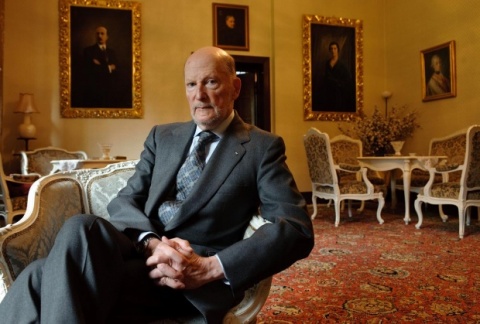 Former Bulgarian Prime Minister Simeon Saxe-Coburg-Gotha (2001-2005) has expressed his concern over the growing political tensions in the country, urging the nation to unite instead of dividing.

The former Bulgarian PM has sided with the embattled Socialist-led coalition government, criticizing the anti-government protesters and the media for what he believes has been a biased coverage.

In an analysis posted on his website, kingsimeon.bg, Simeon Saxe-Coburg-Gotha has pointed out that a nation can only achieve prosperity through unity.

The former PM has called upon the Bulgarian society to stop dividing itself into "protesters and counter-protesters" and seek ways to work together.

He believes that "certain circles" are working behind the scenes in an attempt to divider the Bulgarian nation. Saxe-Coburg-Gotha has appealed to protesters not to take their children at rallies, "however innocent it may appear."

The former PM has expressed his concern over what he has described as "the lack of respect for institutions" in media and social media.

"I am afraid that with such an attitude, and with such mutually exclusive appeals, we are not just embarrassing ourselves in front of the world, but also scaring away investors and tourists," he said.

Born in 1937, Simeon Saxe-Coburg was enthroned, under a regency, as Bulgaria's tsar following the untimely death of his father Boris III in 1943. In 1946 he was formally deposed by the communist regime and had to flee the country with hisfamily.

Simeon re-entered Bulgarian politics with a blast in 2001, founding the liberalNational Movement for Stability and Prosperity, which decisively won general elections that year.

Following elections in 2005, NMSP was a partner in a tripartite coalition cabinet (2005-2009) with the Bulgarian Socialist Party and the Movement for Rights and Freedoms.

Simeon was not part of the cabinet chaired by socialist leader Sergey Stanishev, but continued to exert influence over Bulgarian politics via an informal "coalition council" consisting of him, Stanishev and then MRF leader Ahmed Dogan.

Saturday marks the 72nd straight day of anti-graft protests demanding the resignation of the current coalition government formed by the Bulgarian Socialist Party and the Movement for Rights and Freedoms, with the support of ultranationalist party Ataka.