President: Bulgarians Must Be True to National Ideals 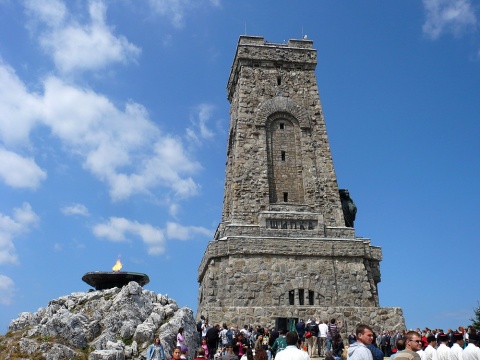 Thousands of people walked on foot or drove to Bulgaria's Shipka peak to attend the ceremony marking the 136th anniversary of the heroic Shipka Pass Battle during the 1877-1878 Liberation War. Photo by starazagora.net

Bulgaria's current and future generations must know the ideals that inspired their ancestors in dark times of our history, says President, Rosen Plevneliev.

He spoke Saturday, delivering the keynote address at the official ceremony marking the 136th anniversary of the heroic Shipka Pass Battle during the 1877-1878 Liberation War.

The President stressed it depends only on Bulgarians to continue the heroic act of those who fought at Shipka by working with dignity, acting with wisdom and building on the national ideal for European values and prosperity.

"The day today is free; the road is open for unity, consensus, and advancement. Thousands of heroes are behind us and the lives of our children are ahead of us. We mark today a historical heroic act and bow to those who achieved the freedom of our nation. For centuries Bulgarian homes preserved the national consciousness; raised the nation's spiritual and political leaders, disseminated education and books, glorified those fighting for liberty, believed in the mission of its apostles. The Shipka battle is an example of courage and national upswing. The valor and the heroism of these Bulgarian volunteer soldiers laid the foundations of the new Bulgarian State and its army. We give tribute to the brave and worthy Bulgarian, Russian, Finnish, and Romanian soldiers who fought for Bulgaria's freedom," said the President in his speech.

Plevneliev stressed he was proud that under his term the commemoration of the Shipka battle turned into national celebrations.

Several thousand people walked on foot or drove to attend the ceremony. Hundreds of vehicles – buses, cars and minivans are parked in the vicinity in the presence of police, fire trucks and ambulances.

People are holding Bulgarian and Russian flags, a huge Bulgarian one is mounted on top the monument.

A reenactment of the epic battle is organized by the national association "Tradition." It includes 100 participants dressed as Bulgarian volunteers, Russian and Ottoman soldiers.

Many diplomats are attending the ceremony as well.

The historic battle of the Russian-Turkish War took place between August 21 and August 26, 1877.

The Shipka pass turned out to be of strategic importance for the outcome of the twelfth war between Russia and the Ottoman Empire but it was initially guarded mostly by the regiments of the Bulgarian "opalchentsi" or volunteers, as well as smaller numbers of Russian, Ukrainian, Belarusian, and Finnish soldiers from the Russian Empire's army.

This force of a total of about 7 000 armed forces faced almost 40 000 Ottoman Turkish troops, but managed to hold its critically important positions until the arrival of the Russian army of General Radetski.

The Russo-Turkish War of 1877-78 ended with the San Stefano Peace Treaty of March 3, 1878, which liberated Bulgaria from Ottoman Turkey.