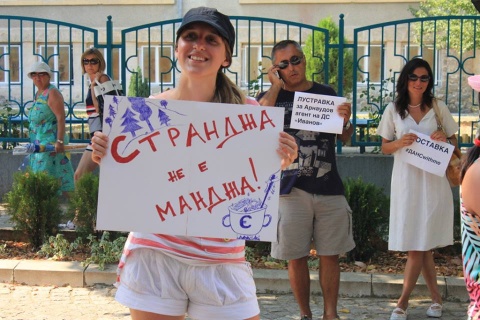 Protesters in Bulgaria's Tsarevo against destruction of nature were called "nudists" by their opponents, photo Facebook

Bulgarians held a second protests Friday in the coastal town of Tsarevo against the, what they deem scandalous, appointment of Petko Arnaudov as head of the local forestry.

The protesters were met by Arnaudov's supporters and former employees of the local Town Hall from the time he was Tsarevo's Mayor on the ticket of the Bulgarian Socialist party, BSP.

Arnaudov, who was exposed as an agent of the ex-Communist State Security, DS, was recently appointed at the post by the Socialist-endorsed Cabinet of Prime Minister, Plamen Oresharski.

The protesters held creative signs against the appointment, hinting Arnaudov will destroy the local Strandzha natural park by giving green light to hotel and other construction as he is notorious for having been doing so during his mayoral term.

Arnaudov did not show up, but to the demonstrators' shouts "resignation," his supporters responded with "junkies," and "nudists," even though the participants were all clad in normal summer attire.

After the first protest, Agriculture Minister, Dimitar Gochev, pledged to reexamine the appointment, led by desire to not stir another controversy. The check ended with the conclusion, Arnaudov fulfilled all requirements for the post, including education and work experience.

This failed to appease the outrage as the protesters blame him for old sins, which were not at all addressed in the conclusion.

As Mayor of Tsarevo (2002 – 2011), he is known as the person destroying significantly Strandzha's nature, particularly by allowing the illegal construction of the "Zlatna Perla" (Golden Pearl) vacation village, which was later demolished over breaches of the law.

According to a July rule of the Burgas Regional Court, he has been the driving force behind the illegal restitution of 20 000 decares of State forests on behalf of the municipality.

The forest is in the perimeter of the same forestry which Arnaudov recently headed.