Some Bulgarians Say Sorry for Part in '68 invasion of Czechoslovakia 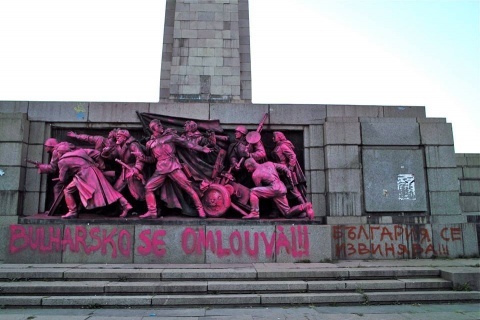 Bulgarians are sorry, at least that’s what some artists in Sofia are saying.

In the wee hours of Wednesday morning, anonymous Bulgarian artists painted pink the Soviet Liberation monument in Sofia, which is a stone and metal monolith featuring a relief of Soviet soldiers “liberating” the oppressed.

And under the newly-painted liberation scene the artists wrote, in Czech, “Bulharsko se omlouva”, which means “Bulgaria apologizes.”

Wednesday marks 45 years since Soviet and Warsaw Pact troops, including Bulgarian, Polish and Hungarian units, launched a massive invasion of the then-Czechoslovakia. Their actions abruptly halted the Prague Spring movement and ushered in the harshest years of Communist authoritarian rule.

Out went Czechoslovak leader Alexander Dubcek, a liberal Communist party member who tried to usher in reforms to restore a sense of liberty among his compatriots, and in came foreign, mostly Russian, forces occupying Czechoslovakia from that day until the end of totalitarian rule, more than 20 years later.

As expected, Czech and Slovak leaders and politicians marked the occasion Wednesday by attending commemorative events in their countries.

But this particular Bulgarian apology was a surprise. It comes in a year when Bulgarian society itself is undergoing a transformation. The country’s civil society is blooming, ordinary people are raising their voices and popular protests have led to the fall of one government in February and continued protests are putting its replacement under pressure to bolster democratic principles.

Painting Sofia’s Soviet memorial pink is a tribute to Czech artist David Cerny, who in 1991 painted pink the Soviet tank memorialized in Prague as a supposed symbol of Soviet liberation.

That caused an uproar and, after the Russian government protested, the tank was repainted green. But it didn’t last long. It’s been painted pink several times since and now its remnants have been moved to a Czech military museum.

Below are select excerpts of that interview.

Are you afraid you’ll be discovered and punished? No, this is not a criminal offense; it is an act of apology, albeit very late. The reaction of the public to this action will determine where we are now: are we in 2013 or back in 1968, when tanks crushed the freedom of the Czechoslovak people.

What is your particular message today?

Guilt is [covered] by an excuse. Freedom can never be crushed. Even with tanks.

Is painting the Soviet memorial art, protest, politics or just hooliganism? It’s a beautiful way to give expression to the important issues in society. Remember that pink tank? After Mr. Cerny was cleared, he was arrested, but then 20 members of the Czech Parliament went and painted it again.

Who are you addressing in this art?

To the whole of Bulgarian society. Also to the Czechs and the Slovak Republic.