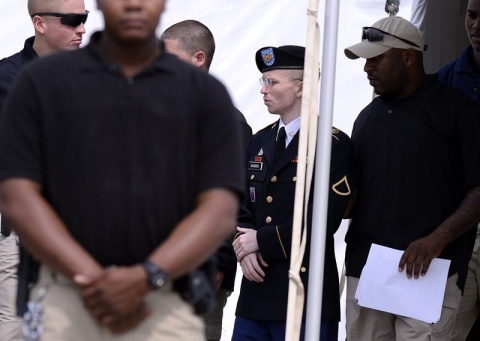 US Army Private Bradley Manning is escorted out of the courthouse after being sentenced to 35 years in prison at Fort George G. Meade, Maryland, USA, 21 August 2013. Photo by EPA/BGNES

Whistleblowing website WikiLeaks has described the 35-year jail term handed to U.S. soldier Bradley Manning on Wednesday as a "strategic victory" due to the opportunity for parole.

Manning, 25, was sentenced Wednesday to 35 years of imprisonment for leaking a trove of classified U.S. military and diplomatic materials to the anti-secrecy group WikiLeaks in 2010, according to reports of the BBC News.

Manning was convicted in end-July of 20 charges against him, including espionage. He was acquitted, however, of the most serious charge of "aiding the enemy," which could have led to a life sentence.

He may be able to seek parole after serving one third of his sentence, including the time he has already served in jail and 112 days in recompense for the harsh conditions of his initial confinement.