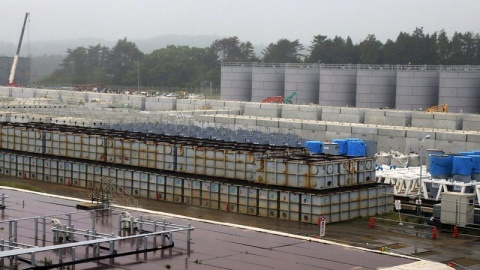 A photo taken 12 June 2013 in Fukushima province, Japan, during a media tour of the Fukushima nuclear plant of the Tokyo Electric Company (TEPCO) shows storage tanks for radioctive contaminated water. Photo by EPA/BGNES

Japan's nuclear agency has upgraded the severity level of a radioactive water leak at the Fukushima plant from one to three on an international scale.

Highly radioactive water was found to be leaking from a storage tank into the ground at the plant on Monday.

It was first classified as a level one incident on the International Nuclear and Radiological Event Scale (Ines), the BBC reminds.

But Japan's Nuclear Regulation Authority proposes elevating it to level three on the seven-point scale. Japanese reports say it is a provisional move that had to be confirmed with the IAEA, the UN's nuclear agency.

The nuclear power plant suffered multiple meltdowns following a massive earthquake and tsunami in March 2011 — a level 7 "major accident" on the INES rating and the worst since Chernobyl in 1986. Hundreds of tanks were built around the plant to store massive amounts of contaminated water coming from the three melted reactors, as well as underground water running into reactor and turbine basements.

However, contaminated water that TEPCO has been unable to contain continues to enter the Pacific Ocean at a rate of hundreds of tons per day. Much of that is ground water that has mixed with untreated radioactive water at the plant. The water that leaked from the tank had been partially treated, with cesium and salt removed, before being stored.