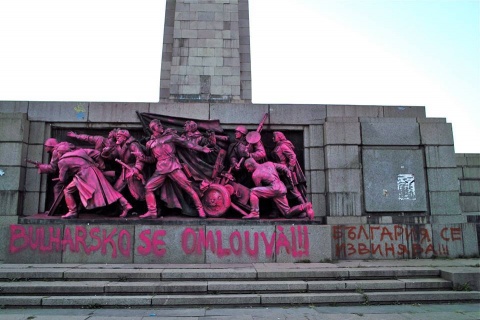 The controversial monument of the Soviet Army in the downtown of the Bulgarian capital Sofia has been colored once again, this time in honor of the Prague Spring.

On Wednesday, the Sofia's Soviet Army Monument "woke up" with the Red Army soldier figures painted in pink and with the inscriptions in Bulgarian and Czech "Bulgaria apologizes" ("Bulharsko se omlouv?").

August 21st marks the 45th anniversary of Soviet crushing of the Prague Spring.

The Prague Spring was a period of political liberalization in Czechoslovakia during the era of its domination by the Communists and the Soviet Union after World War II. It began on January 5, 1968, when reformist Alexander Dubcek was elected the First Secretary of Communist Party of Czechoslovakia, and continued until August 21, when the Soviet Union and all members of the Warsaw Pact, with the exception of Romania, invaded the country to halt the reforms.

Bulgaria was the first country to insist on the invasion and the last one to apologize for its participation – with a declaration of the Parliament in 1990 and in 1997 during the visit of right-wing President, Petar Stoyanov, to Prague.

The Soviet tank, which was the center-piece of the memorial of the Soviet Army in Prague, has been painted in pink several times, first in 1991 by famous Czech artist David Cerny.

This is not the first time when the monument of the Soviet Army in Sofia has been decorated.

In August 2012, colorful hoods of the soldiers of the monument were painted in sign of support for the female Russian punk group Pussy Riot, who were facing trial over "anti-Putin" acts.

There have been several other paintings as well.

The latest "decorators" remain unknown for the time being, and it is unclear exactly when the "decoration" was carried out.