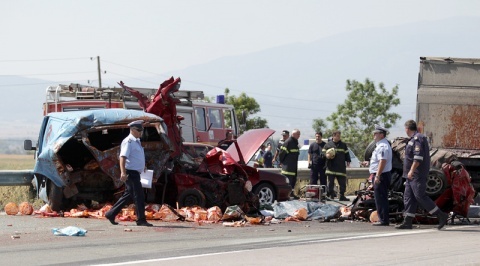 The chain crash occurred Monday morning at the Yana road junction near Sofia. Photo by BGNES

A Romanian truck driver has been arrested for triggering a deadly chain crash on the Hemus highway in Bulgaria Monday, according to police reports.

The truck driver, who is believed to have fallen asleep or exceeded the speed limit, has been accused of causing the death of more then 1 person for which the law predicts a verdict of 3 to 15 years detention.

The chain crash occurred Monday morning at the Yana road junction near Sofia involving a TIR truck with a Romanian registration plate carrying oil, which bumped headlong into a number of cars which had slowed down, anticipating the traffic jam.

The chain car crash cancelled the official ceremony for the opening of theYana road junction connecting the Hemus Highway to Sofia Ring Road.

The crash took the life of two men at the age of 55 and 64 years. Five citizens , among whom an 11-year-old child, were injured and accommodated in hospitals in the Bulgarian capital Sofia