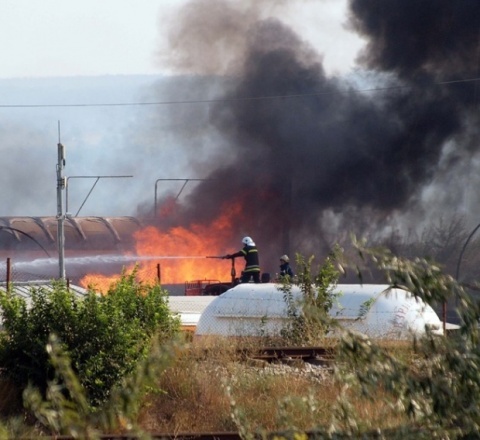 A photo by BGNES of the second blast of a gas-filled tank in the Bulgarian village of Ezerovo, in the district of the coastal city of Varna, that went off around 6.30 pm Wednesday.

The two people who sustained severe burns in the explosions near Bulgaria's village of Ezerovo, close to the Black Sea city of Varna, remain in critical condition and in intensive care.

Another seven people are also in the burns ward, but not in intensive care, according to Gen Stoyan Tonev, Director of the Military Medical Academy in the capital Sofia, where the nine injured are listed.

Speaking for Nova TV Sunday, Tonev informed the man who sustained 90% is in very grave condition, the other is in critical condition, while the seven are recovering and are undergoing plastic surgeries.

A total of 11 people, including seven firefighters, were injured in a fire and consequent explosions, which occurred in a train composition of propane-filled gas cisterns near Varna on Wednesday.

The fire erupted at around 4 pm EET, followed by two explosions.

Firefighters extinguished the fire at approximately 11:30 pm, according to local media.

Authorities are currently conducting an investigation into the incident.

The incident has posed no danger for the environment, according to Bulgaria's Environment Ministry.

No locals from the village were injured, but some were stricken by panic as their houses sustained damage such as cracks, fallen wall paint and broken windows. Some evacuated on their own, taking their families to friends and relatives in Varna.