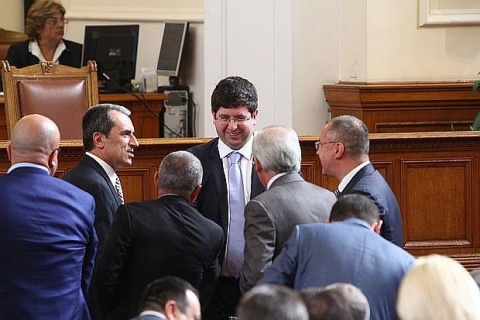 Bulgaria’s Socialist-led government scored one more victory against protestors and President Rosen Plevneliev after parliament defeated his veto on the budget revision on Friday. Photo by Sofia Photo Agency

Bulgaria’s parliament overturned on Friday the presidential veto on the budget revision after securing the votes of 130 MPs.

Ninety-three MPs voted against, nobody abstained.

Members of parliament from the ruling Socialist and ethnic Turkish parties, together with the nationalists, united to overturn the veto.

The ruling Bulgarian Socialist Party and Movement for Rights and Freedoms have exactly 120 MPs out of 240.

But to overcome a presidential veto, an absolute majority of at least 121 MPs was needed.

The Socialists and the Movement thus relied on votes by ultranationalists Ataka, who as expected supported them.

Adopted at the end of last month by the Socialist-led government, the amendments pave the way for a spending deficit of 2% of GDP as opposed to 1.4%, which was to be financed by external debt.

The budget revision provides for a new loan in the amount of BGN 1 B to be used as a buffer for the fiscal reserve in 2014, when Bulgaria must make new payments on its foreign debt. Other funds will be slated for the overdue money for the business and for social measures.

Economic growth is revised down to 1% from the original figure of 1.9%, while deficit increases by BGN 493 M, accounting for 2% of forecasted GDP.

Finance Minister Petar Chobanov has defended the amendments, saying the budget revision aims to correct the country’s fiscal policies from the last few years, which hampered economic growth and limited the opportunities for assistance to vulnerable groups in the society, as well as set right the misleading forecast for revenues and spending.