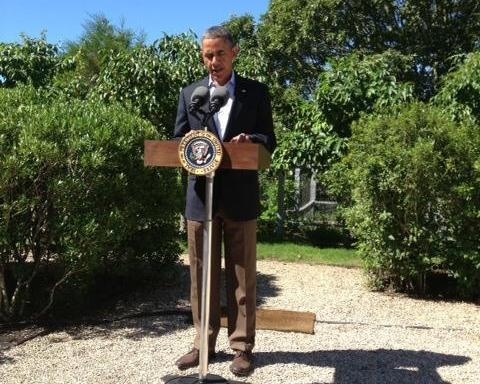 US President Barack Obama gave an emergency speech regarding the current situation in Egypt Thursday in Martha's Vineyard. Photo by CNN

US President Barack Obama has given an emergency speech at the situation in Egypt, where more than 500 have perished in violent clashes overnight.

Obama said America is "concerned" by recent events, since they are showing that Egypt is not moving along the principles of "non-violence, a respect for universal rights, and a process for political and economic reform."

"As a result we've notified the Egyptian government that we are cancelling our joint biannual military drills which were scheduled for next month," announced Obama.

The US President joined other world leaders in calling for a lifting of martial law in Egypt, and for a return to peaceful action by all parties.

Obama was critical of what he called deposed Egyptian president Mohammed Morsi's failure to form an inclusive government that respects the rights of all Egyptians.

But he also expressed disagreement with Morsi's July deposition by a military coup, and the violent events that ensued.

Obama stressed that his country, and the entire world are closely watching the ongoing events in Cairo.