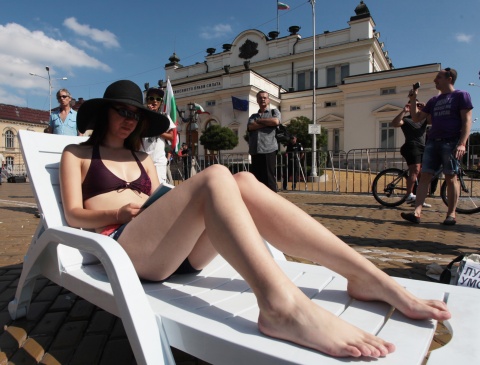 At the end of July Bulgarians staged several non-traditional coffee-drinking and sun-bathing anti-government rallies in front of the Parliament building in downtown Sofia. Photo by Sofia Photo Agency

Bulgaria’s formerly ruling party GERB has launched a sign-up to demand an immediate extraordinary sitting of Parliament over the presidential veto on the budget revision, it emerged on Thursday morning.

Under local regulations the parliamentary speaker is obliged to convene parliament within seven days if one-fifth of the MPs demand for that.

The parliamentary group of GERB party totals 97 people and account for nearly two fifths of all MPs.

In a Wednesday media statement, Borisov, leader of center-right party Citizens for European Development of Bulgaria (GERB), commented on the partial veto imposed by President Rosen Plevneliev on the Law on Amending and Supplementing the State Budget Act for 2013.

"Postponing the sitting for August 30 is throwing dust in the eyes of the people. The Bulgarian Socialist Party (BSP) obviously finds holidaymaking and sunbathing more important than the budget. Yet again, the government has preferred to stay on holiday instead of handling affairs of national importance," Borisov stated.

He warned that the GERB party would collect the signatures of 48 MPs in favor of a motion to call an immediate parliament sitting, as they were entitled to do under the Parliament's rules of procedure.

"It is inadmissible to go on holiday at a time when the state faces such uncertainties. To us, the presidential veto is well-founded and it comes as no surprise. We drew attention repeatedly in Parliament to the uncertainties and doubts surrounding the new debt of BGN 1 B which the government wants to take. We must be very careful about spending the money of Bulgarian taxpayers and we must be even more careful about spending borrowed money because they will be paid back by the next generations," he added.

In a Wednesday statement, Bulgaria's head of state announced he had imposed a partial veto on the Law on Amending and Supplementing the State Budget Act for 2013, saying the Socialist-led coalition government had not shown enough transparency in its use of public money.

He explained that the package of social measures included in the budget update constituted a very small share of the earmarked expenses.

Plevneliev pointed out that there was insufficient information about how the new debt of BGN 1 B would be spent.

He noted that he failed to see serious plans about policies and reforms in support of competition and economic growth.