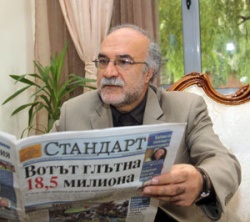 Relations between Iran and Bulgaria are warm and friendly, according to new Iranian ambassador to Sofia Abullah Norouzi.

In particular, Norouzi stressed that Bulgaria's and EU's linking of the July 2012 Burgas bus bombing to Lebanon organization Hezbollah will in no way harm Iran's relations with Bulgaria.

"This accusation was nothing to do with Iran, either directly or indirectly," stated the diplomat in an interview for the Bulgarian National Radio Sunday.

"Relations between Iran and Bulgaria have a very ancient history. Contemporary diplomatic relations are 130 year old. But then we have the historic relations and contacts between our two peoples," said Norouzi.

"The Bulgarian people is among the few peoples in Europe that have common roots with us. These two elements help both the Bulgarian government and our government to have a greater desire for deeper relations," added he.

One of the leading theories regarding the origin of the ancient Bulgarians, or Bulgars, is that they were an Indo-Iranian tribe.

Even apart from this theory, the Bulgars are believed to have come in extensive contact with Persians in Central Asia around the 3-4th centuries AD.