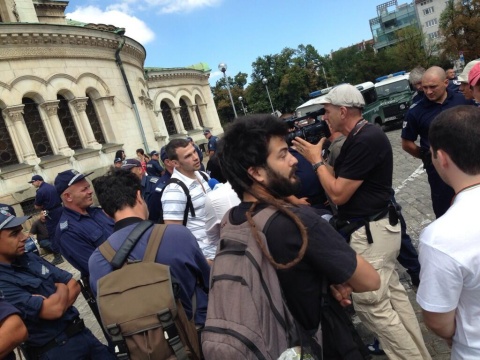 Bulgarian anti-government protesters insist that clashes and tensions have erupted in downtown Sofia between them and riot police after 11 am Wednesday.

They have distributed pictures on Twitter. The worst occurred close to the metal fences on the side of "Oborishte" street adjacent to the Parliament. About 100 protesters have gathered there. People from other cities and towns have arrived as well and have joined them.

According to eyewitnesses, one young man has been attacked by riot police, and was later arrested. Others have been arrested as well.

The Sofia Police Directorate, SDVR, have told the online news agency Dnevnik they had no idea that was going on near the Alexander Nevsky cathedral where some of the said fences are located.

One of the eyewitnesses, Justine Toms, told Darik radio that police have brutally beaten the young man. According to her, he is from the Danube town of Kozloduy.

The incident happened after police asked the protesters to move away from the fences. The young man refused and was attacked. He was arrested on grounds he did not have ID papers.

The move provoked strong reaction among the demonstrators and tensions escalated.

Bulgarian celebrity, actor Ivaylo Zahariev, staring the leading character in the hit TV series "Undercover," has been protesting there as well. He said the police have arrested several people for refusing to show ID documents, but adds the situation is back to calm now.

"One boy was kicked in the ankles. One woman says she saw the police banging his head on the pavement. He did not want to go inside the patrol car. They wanted to arrest another young man, but we convinced him to move away and prevented that arrest," Zahariev explained.

The Bulgarian National Radio confirms Zahariev report of just one arrest with police acting violently, and one prevented arrest. The broadcast informed of no other detentions.

Bulgarians have been protesting once again Wednesday by staging the now-traditional coffee-drinking anti-government daytime rally in front of the Parliament building in downtown Sofia.

Following the earlier announcement that the protest will be turning into a "beach revolution" over the intentions of the Members of the Parliament to go on summer break next Monday, a number of people arrived in bathing suits, carrying beach towels. There are even inflatable pools filled with water.

The morning protest is to merge with the traditional evening rally, the 48th in a row, starting in front of the Council of Ministers building.

The series of the record-breaking relentless anti-government protests in Bulgaria was triggered by the scandalous appointment of a murky politician and businessman to lead the State Agency for National Security (DANS).

Although the appointment was revoked, the people went on to demand that the Cabinet resign collectively over ties with oligarchs.

The government, however, is firm it will not resign as it has important tasks to accomplish.