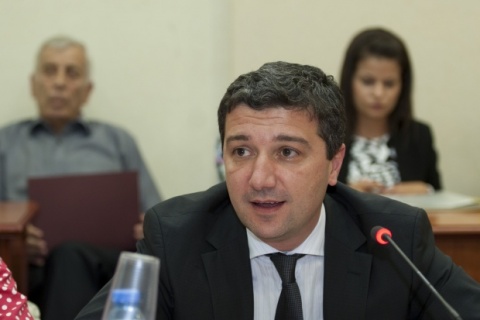 Bulgaria's energy sector is experiencing an extremely difficult situation, according to a report of Economy and Energy Minister Dragomir Stoynev.

According to the report, presented by Stoynev at a Tuesday sitting of the parliamentary energy committee, the production of heating energy decreased by 11.5% year-on-year in the first quarter of 2013.

Stoynev, as cited by the Focus news agency, commented that the trust of end consumers in heating utilities had plummeted.

As another problem in the sector he cited the delayed spin-off of the Electricity System Operator (ESO) from the National Electric Company (NEK).

"There has been a delay by over two years because of the financial model, which cannot be used by the State Commission for Energy and Water Regulatory Commission (DKEVR), and does not match the financial condition of the companies and the regulatory framework," he stated.

He also pointed out that the Chiren gas storage facility was empty and some BGN 200 M were required to fill it with gas, adding that the poor financial condition of state-owned gas supplier Bulgargaz made it necessary to seek a bank loan.

He explained that the uncollected revenues from the Sofia heating utility, Toplofikatsiya Sofia, accounted for a large portion of the debts of state-owned gas supplier Bulgargaz.

Stoynev emphasized that Toplofikatsiya Sofia owed a total of BGN 450 M to Bulgargaz and the Bulgarian Energy Holding, while the debts of the state-owned gas supplier stood at BGN 461 M.

"We inherited an extremely difficult and complicated situation, and the current government is not to blame for the current condition of the energy sector ," Stoynev argued.

He suggested that the first step towards rescuing the energy sector was the new electricity pricing model of DKEVR, which allowed for all power generating capacities in the country to remain operational, as well as a reduction in power tariffs for end consumers and the business sector.

Following a 9-hour sitting late on Monday, Bulgaria's State Commission for Energy and Water Regulation (DKEVR) announced its final decision on electricity prices as of August 1, 2013.

Customers of the three power utilities, CEZ, EVN and Energo Pro, will pay an average of 5% less per kWh, which is said to have been achieved thanks to a new electricity pricing scheme.