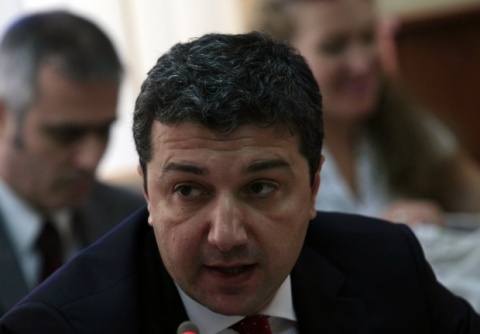 The meeting was also attended by Maya Manolova, Deputy Parliament Chair, according to reports of news.bg.

Earlier on Tuesday, it was announced that Stoynev had announced new coal prices per ton of conditional fuel.

Speaking after Tuesday's meeting with Stoynev, Vladimir Topalov, head of the mining federation at the Podkrepa Labor Confederation, told journalists that the output of the Maritsa Iztok Mines by July 2014 was expected to register a nearly two-fold decrease to the level of 17 M tones.

"In Western Bulgaria, all mines except a part of the Pernik Mines and the open pit mine in Bobov Dol will be closed. This will lead to the loss of over 3500 jobs," he stated, stressing that the electricity production quota of the Bobov Dol TPP had been halved.

He drew attention to the fact that the 2.7% indexation was absolutely insufficient because coal prices had remained unchanged for three years.

"This price generates losses and our calculations show that the Maritsa Iztok Mines will have run up losses of BGN 140 - 160 M by the end of the year. Minister Stoynev sets the price, and he keeps saying that the problem with the price will be solved. This means that this model may stay in effect for a certain period, after which a part of it will have to be amended. This means that there may be new prices of electricity on the regulated market, not for citizens, by the end of 2013," he said.

Following a 9-hour sitting late on Monday, Bulgaria's State Commission for Energy and Water Regulation (DKEVR) announced its final decision on electricity prices as of August 1, 2013.

Customers of the three power utilities, CEZ, EVN and Energo Pro, will pay an average of 5% less per kWh, which is said to have been achieved thanks to a new electricity pricing scheme.

Speaking after Tuesday's meeting with trade union representatives in the mining industry, socialist MEP and Deputy Parliament Chair Maya Manolova commented that the changes would result in layoffs of 300 people, adding that attempts were being made to secure alternative employment for them.